The word “Frankenstein” conjures up in most people’s mind the image of Dr. Frankenstein’s creation, his pastiche of bodily parts that he gave life to. We picture him as a huge fearsome man with a flat head, bolts protruding from his neck, scars on his face, long arms, and wearing tightly fitted clothes and giant heavy boots. This image is often credited to Mary Shelley, the author of the original novel Frankenstein, published in 1818. But is this creature really her creation or Jack Pierce‘s, the make-up artist who re-imagined Frankenstein for the 1931 Universal horror picture?

As Mary Shelley describes Dr. Frankenstein’s creation, he seems to have been intended as quite a handsome fellow but what resulted was not what the doctor had ordered:

“His limbs were in proportion, and I had selected his features as beautiful. Beautiful! Great God! His yellow skin scarcely covered the work of muscles and arteries beneath; his hair was of a lustrous black, and flowing; his teeth of a pearly whiteness; but these luxuriances only formed a more horrid contrast with his watery eyes, that seemed almost of the same color as the dun-white sockets in which they were set, his shriveled complexion and straight black lips.”

The first illustrations for the book – steel engravings dating from the 1831 edition – display the size of the creature, his thin skin covering, and his long black hair ( see illustration above ). Other drawings show him wearing a cloak, a toga-like covering. 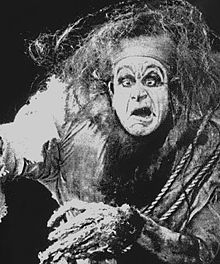 For the first film adaptation, made in 1910 by Edison Studios, the monster had a grotesque face hidden under mounds of unruly strands of hair and long deformed fingers. As you can see in the close-up, he was beastly. In 1920, an Italian silent film Il mostro di Frankenstein – now considered lost – portrayed him as a bald giant with facial features not unlike the Deutsch vampire Nosferatu.

It was eleven years later that the monster returned to the screen, this time in the Universal Pictures film Frankenstein (1931). Jack Pierce, an extraordinary make-up artist heralding from Greece, was assigned to create the monster, portrayed by the fabulous Boris Karloff.

In 1926, Pierce had helped director Raoul Walsh create the right look for actor Jacques Lerner who played a man impersonating a primate in the film The Monkey Talks. His make-up work was so richly detailed that it caught the attention of Carl Laemmle, then head of Universal Studios. He hired Pierce for a full-time position as a makeup artist and promptly put him to work in The Man Who Laughs, where he created the iconic look of Conrad Veidt‘s character Gwynplain, which in turn inspired Bob Kane’s character of The Joker in his “Batman” comic book series. 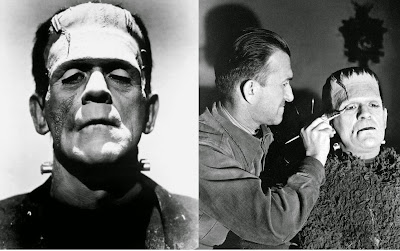 His most important work prior to Frankenstein was undoubtedly that of creating Bela Lugosi‘s ghostly pale Count Dracula in Dracula (1930). After the resounding success of this film, Universal Studios decided to adapt other classic horror novels into films, selecting Mary Shelley’s “Frankenstein” as their next project. It was Pierce’s task to take Dr. Frankenstein’s monster from the pages of her book and transform him into a monster that could walk on-screen.

As James L. Neibar describes in his book “The Monster Movies of Universal Studios” :

“Make-up artist Jack Pierce is responsible for creating the iconic makeup for the monster. Collaborating with Karloff, it was Pierce who designed the rectangular shape of the head with the flat top, the protruding brow, and the electrodes on either side of the monster’s neck, while Karloff removed his partial dental plate, causing his face to indent……Pierce’s vision of the Frankenstein monster has since become the most noted representation of the character. ”

Envisioning what kind of creation a doctor from that period of time could have assembled took Pierce nearly six months of research. Before tests were undertaken on Karloff, Pierce had created a clay model of what he hoped to achieve. Jack Pierce describes this process…

“It was a lot of hard work, trying to find ways and means, what can you do? Frankenstein wasn’t a doctor; he was a scientist, so he had to take the head and open it, and he took wires to rivet the head. I had to add the electrical outlets to connect electricity in here on the neck. I made it out of clay and put hair on it and took it in to Junior Laemmle’s office. He said, ‘you mean you can do this on a human being?’ I said, ‘positively’. He said, ‘all right we will go to the limit.’”

Boris Karloff spent four hours each morning in the makeup chair, letting Pierce apply heavy putty to his eyelids, thick grey makeup all over his face, and heavy electrodes to his neck….makeup which in addition took nearly an hour each day to remove.When Frankenstein was released in theaters, it was an immediate box-office hit. This imagining of Mary Shelley’s character became so famous that within four years the monster had to be resurrected from his untimely death to return to frighten other villagers, this time in The Bride of Frankenstein. He would also return in Son of Frankenstein (1939), and The Ghost of Frankenstein (1942)…the first film that Jack Pierce received screen-credit for his work on the monster.

That is perhaps the saddest foot-note of all; that viewers at the time did not know and could not know who was the real inventor of the monster that they loved to watch onscreen – Jack Pierce. During the 1930s, make-up artists were often not given credit for their work, but Pierce certainly deserved screen-credit for this creation since it was so imaginative and so unlike Mary Shelley’s description of the creature.

Thankfully, today most film fans recognize the name of Jack Pierce and know his body of work. But to help educate others, the next time you dress up as the monster or see him at a Halloween costume party, be sure to call him by his proper name – Dr. Pierce’s Monster.
Previously on MovieFanFare: The Faces of Jack Pierce

Constance Metzinger runs the website Silver Scenes, “a blog for classic film lovers.” This post originally ran last year and is being reprinted as part of our 31 Days of Halloween celebrations!