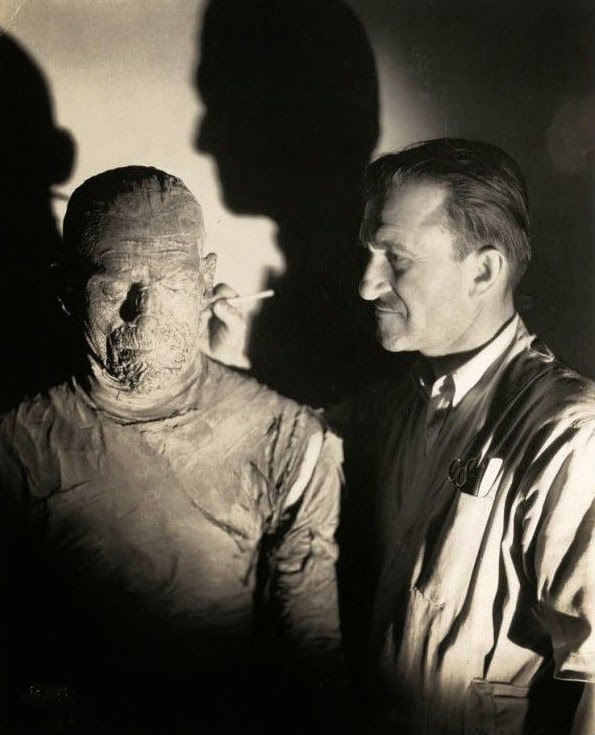 Jack Pierce himself only had one face, one which wasn’t particularly liked in Hollywood, but – as a makeup artist – Pierce created many faces. So many that the few we will highlight in this post will only scratch the grease-painted surface of this man’s talent.

These days Pierce is best remembered for his work in the creation of the “look” of the Universal monsters with the exception of The Creature from the Black Lagoon. It is for this work that he – posthumously – earned a lifetime achievement award from the Hollywood Make-Up Artist and Hairstyle Guild.

Jack Pierce was born in Greece in 1889 (he was christened Janus Piccoulas by birth) and came to America with his parents in the early 1900s. He started in the film industry working as a projectionist and then a stuntman before becoming an actor. Between 1915 and 1925 he played in twelve different films, usually being cast as a villain.

Pierce often applied his own makeup while being an actor and he enjoyed creating different effects to detract from his shortness (he was 5′ 5″). He got his first chance at applying makeup to other actors when he stepped in to transform actor Jacques Lernier into a speaking simian for his role in Raoul Walsh’s The Monkey Talks (1926). This work was observed by Carl Laemmle who hired him full-time at Universal, where one of his very first assignments was applying the makeup for Conrad Viedt in The Man Who Laughs (1928).

In 1930, Pierce was assigned to work on Dracula and created a special color greasepaint for the sanguinary count, portrayed by Bela Lugosi. However, Lugosi had always applied his own makeup (a common practice for stage actor) and so he refused to let Jack Pierce do his makeup. Lugosi reflected later that Pierce got his revenge on him when he designed such torturous makeup as Ygor and the Frankenstein for him to wear. 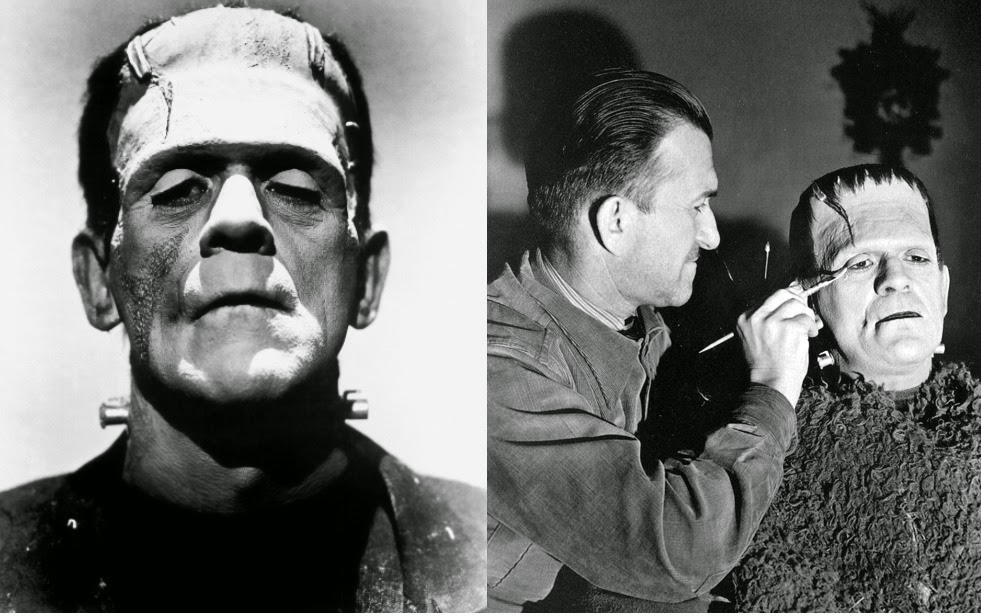 It was during the 1930s that Pierce rose to fame beginning with his work on The Monster in Carl Laemle Jr.’s Frankenstein. Mary Shelley wasn’t all too specific about the Monster’s appearance in her 1818 novel, and so Pierce let his imagination run free and decided to give the pastiched character a flat-topped head with very heavy eyelids. A nice sleepy look. Unfortunately for Karloff, the makeup application was a six hour process involving the attachment of a skullpiece for the black hair, then a layer of cotton and spirit gum for the forehead, followed by a glob of specially designed putty around the eyes, a nice dirty scar, some electrifying bolts, and a topping of green-grey greasepaint. Karloff personally contributed the sunken cheekbones by having a dental bridge removed. 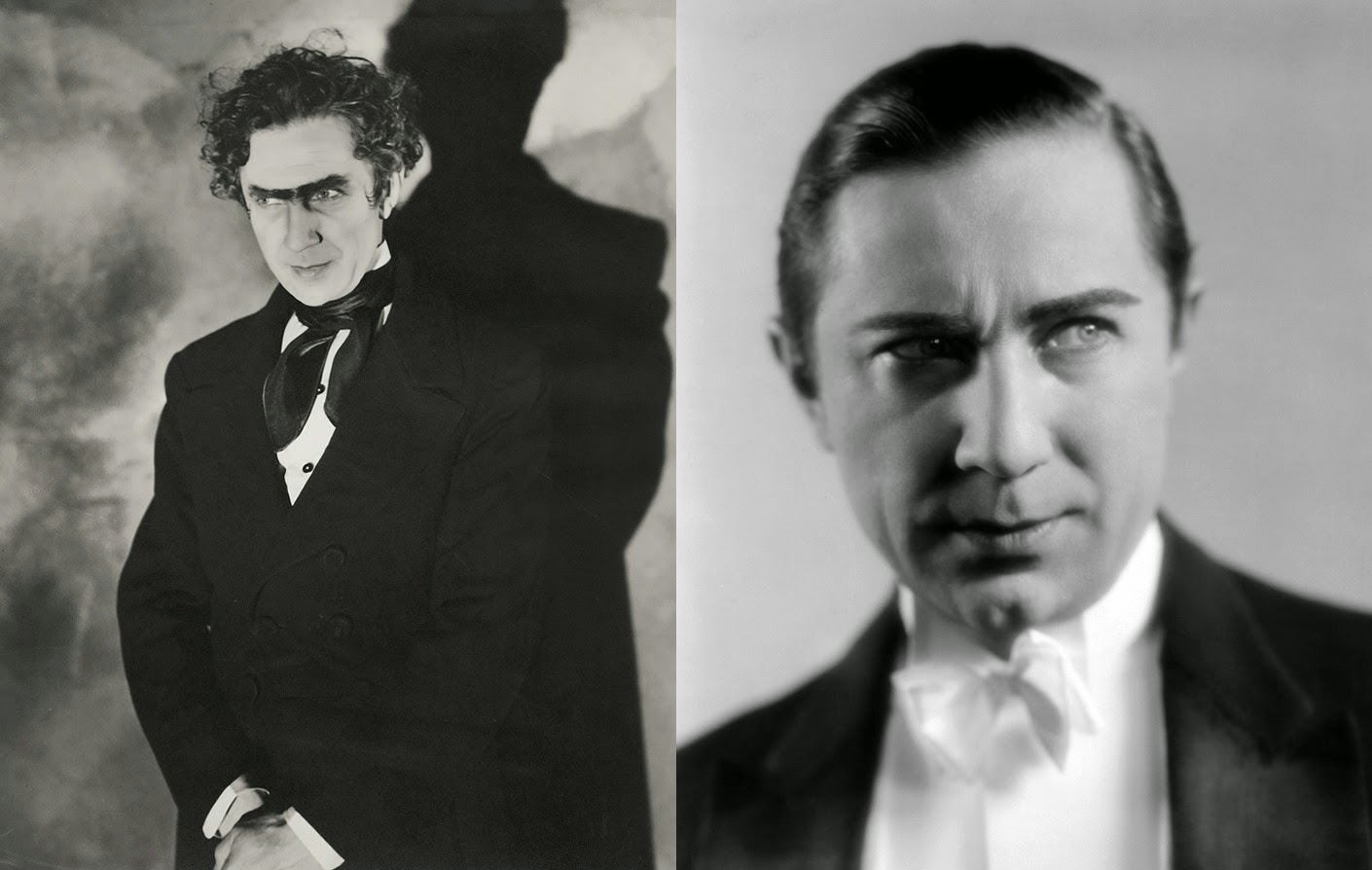 This juicy horror flick gave Pierce a chance to paint Bela Lugosi an entirely different face. The bushy eyebrows of the Count can be seen again, but now they are connected with a bridge of hair, making Dr. Mirakle look like he has one giant eyebrow. 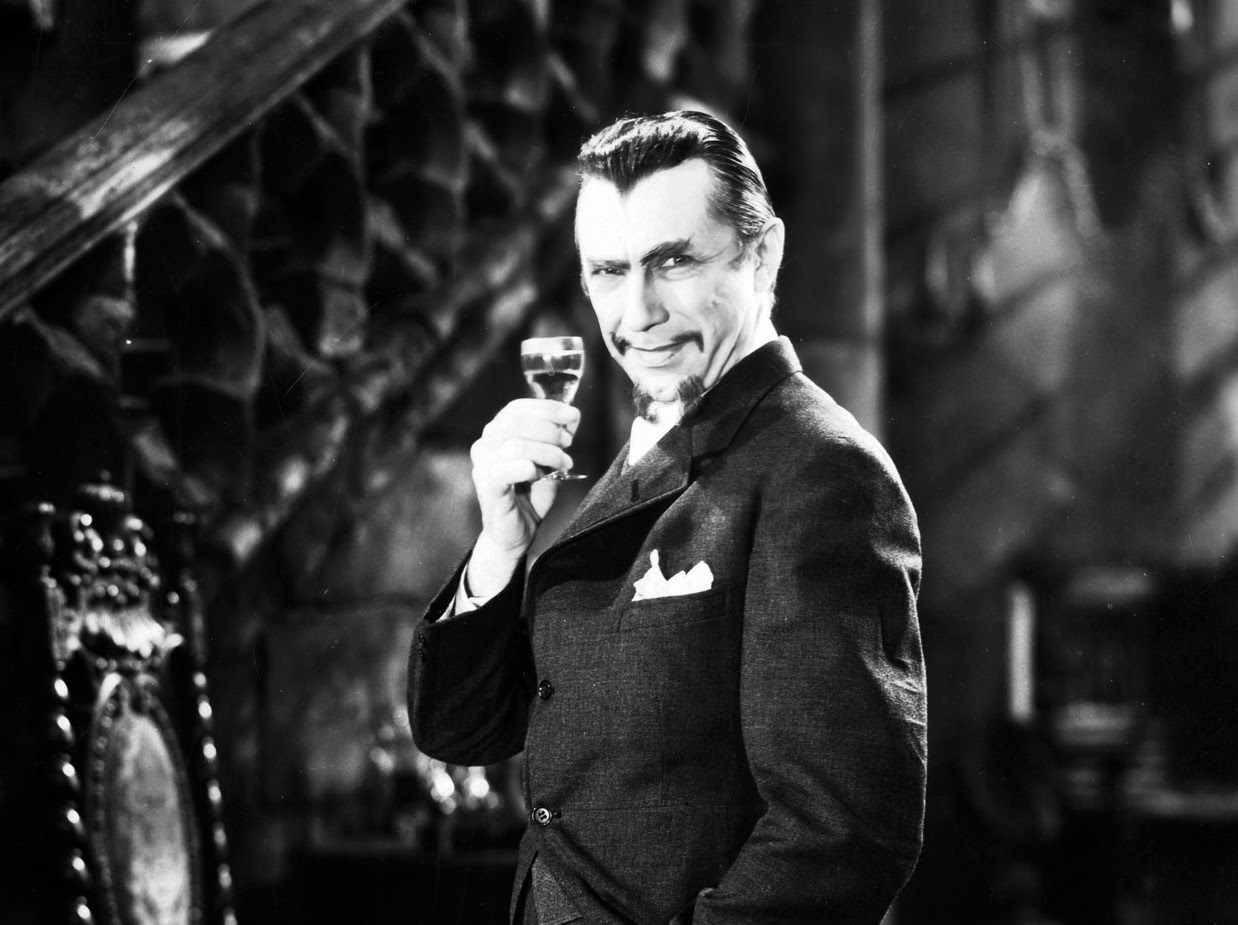 Once again Bela got to sit in the makeup chair, with Jack Pierce transforming him this time into the devilish voodoo master, Murder Legendre. With curling beard strands, heavy dark eyebrows and a very low widow’s peak, Murder was a character guaranteed to frighten women and children out of the theaters. Karloff thought the Monster was an elaborate makeup process, but The Mummy offered him a chance to really test his patience. It was complete head-to-toe makeup application. The wrappings of the mummy were treated with flames and acid to age it properly then dipped in collodion (a strong smelling liquid plastic) and stretched over Boris Karloff‘s face. Pierce applied Fuller’s Earth over the wrappings after it was dried to give it an “arid” look. Check out this great article on the mummifying process, originally printed in Mechanix magazine. There really wasn’t much monster makeup involved in The Invisible Man, but the coloring applied to all of the supporting players really enhanced the look of the film. This scene doesn’t display any of Pierce’s skill, just Una O’Connor’s facial expression was so good we had to include it. 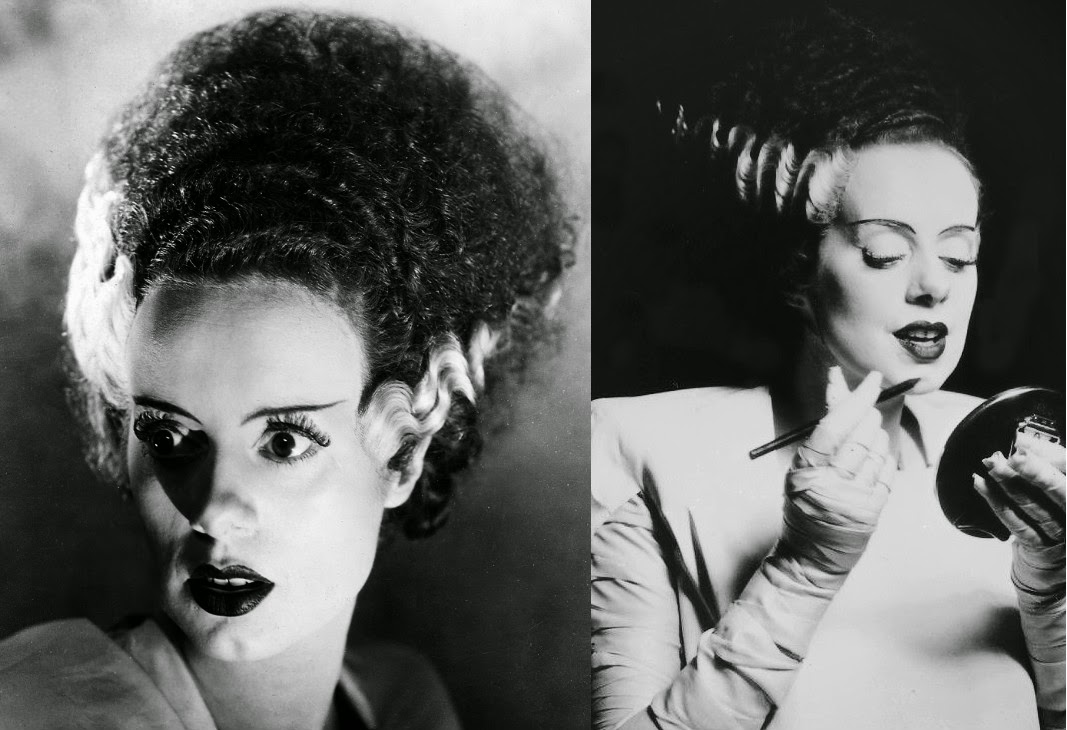 One of the reasons that Jack Pierce was not very much loved in the Hollywood circle was because he was such a demanding make-up artist. Film Historian Greg Mank interviewed Elsa Lanchester at one time and this is what she had to say about the Bride’s makeup process, ” [Pierce] took ages to make a scar that hardly shows under my chin. For a whole hour he would draw two lines of glue, put a red line down the middle, then start making up the white edges of the scar – meticulously done. Well, frankly, I’m sure he could have bought such a scar for ten cents in a joke shop…..After the scar came the eyebrows, and the hair. It’s my own hair. I had it lifted up from my face, all the way around; then they placed a cage on my head and combed my own hair over that cage. Then they put the gray-streak hairpieces in afterwards.” 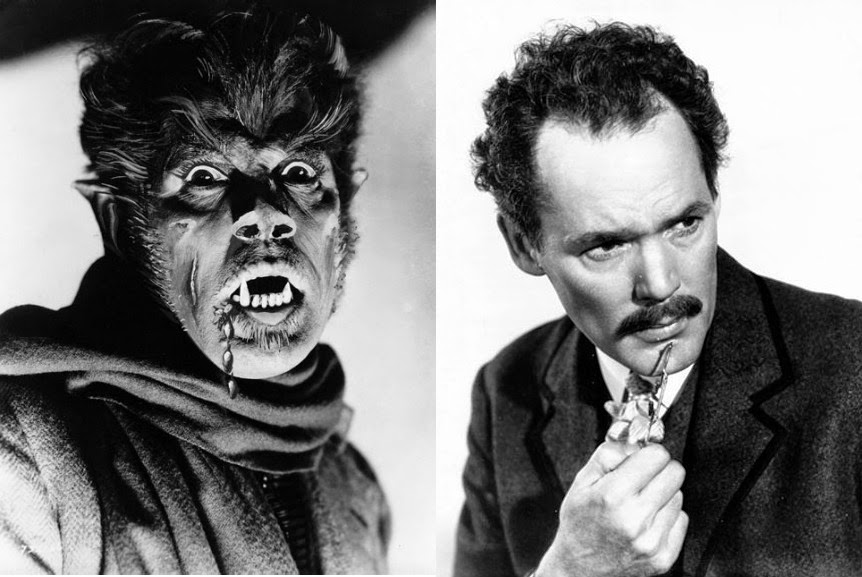 This was the first of the Universal “wolf man” films, even though it often gets overlooked in favor of the Lon Chaney version. Henry Hull, who was cast in the title role, objected to Pierce’s original concept of how Wolfie should look, claiming that it obscured his features. The final design pleased both Pierce and Hull even though it left barely a resemblance to the actor.

The 1940s was Pierce’s busiest decade and he worked on all of the Mummy sequels (regardless of Chaney’s personal dislike for him), the Frankenstein sequels, and the Dracula sequels. He also created some menacing new faces in films like Man-Made Monster (1941), The Phantom of the Opera (1943), The Mad Ghoul  (1943) and Cobra Woman (1944). For Universal’s second venture into lycanthrope land, Pierce created an entirely different look for the “wolf man”, adding much more hair around the cheekbones and a bushy head of hair. Chaney reportedly hated working with Pierce due to the tedious transformation process he made him undergo, which included having yak hair glued to his face. This film was the eighth entry in the popular Universal Sherlock Holmes series starring Basil Rathbone and Nigel Bruce. The detective duo set out to the backwoods of Canada to capture a criminal who was once a former actor (and a makeup artist himself) and this fellow uses his skill to create different identities for himself, one of which is a fleeting glowing shadow in the marshland. Holmes got to try out some disguises himself and in this scene he is seeing if Watson can recognize him as a messenger. We can’t even recognize him as being Rathbone. 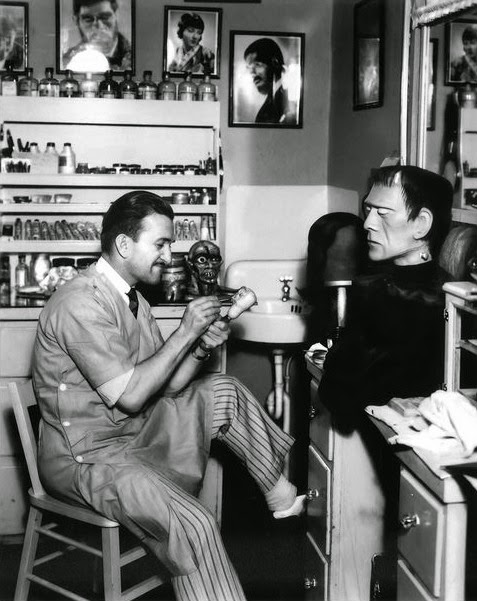 In addition to working on The Scarlet Claw, Pierce also designed the makeup for four other Sherlock Holmes films. By the mid-1940s however, mystery and horror films were beginning to wane with the public taste. Pierce found himself doing the work of an everyday Hollywood makeup artist and applying cakes of powder and rouge to celebrities such as Deanna Durbin (Because of Him, I’ll Be Yours), Susan Hayward (Canyon Passage, Smash Up: The Story of a Woman) and Abbott and Costello (Little Giant and The Time of Their Lives).

The 1940s brought about unwanted change for a traditionalist like Jack Pierce. Younger makeup artists were dropping the “out of the kit” techniques in favor of the quicker and more comfortable latex forms. Studio heads at Universal were in favor of these techniques because they saved time and cost during the making of a film. Pierce held on to his style and was eventually let go from Universal in 1946.

Jack Pierce turned to doing television work in the early 1950s and when budget monster classics became the rage in the latter years of the decade he once again took to creating monsters. Some of these included the Beast (Beauty and the Beast), The Amazing Transparent Man, and burly conquistador in The Giant from the Unknown. His final work was on Mister Ed, where he was the show’s regular makeup artist.

This article originally ran earlier this year, and is being reprinted as part of our 31 Days of Halloween series of posts.