Not everyone can be an Avenger. Sometimes superheroes are more goofy than heroic. As this guest post illustrates…

It’s been one of those days. I woke up feeling pretty damn decent about the world. I slipped on my tights and cape and mask and prepared to do battle against the evil injustice in the world. But life just handed me a sack of lemons and said “deal with it”.

First thing I did was scope out the park. Sure enough, there was a couple of muggers holding up a little old lady, trying to snatch her purse. I swooped in, TA-DA, like I always do, and wham-bam, I save the old lady’s pension from the would-be dregs of society. Bad mistake! The two muggers were 16-year-old kids and now their parents are threatening me with child abuse charges. Worse still, the little old lady thought I was trying to horn in for myself and sprayed me with pepper spray. And then started beating me over the head with her purse. She must’ve had a couple of rocks in there with her money…OUCH!

OK, bad start, but there’s still the rest of the day, right? So I headed over towards the bank and sure enough there was a full scale robbery going on. Two rough-looking characters were holding the bank customers hostage, and police were surrounded the bank trying to coax them out. I rush in and resolve the situation. Pretty neat, eh?  Well, not so much.  It turns out that Hollywood was trying to do a remake of Dog Day Afternoon and the scene was just a movie set. (So that’s why one of the “robbers” was shouting “Attica! Attica!”)  The director nearly had me arrested for disrupting the shoot (and called me several disparaging names due to my costume, some people are so cruel).

Now, I know that things can’t be all that bad for me. Surely there must be a need for truth justice and the American way somewhere in this place.  So I looked into the activities of my old nemesis, The Dark Legionnaire. Well, guess what, the old Dark-meister had gotten religion and was now a TV preacher going under the name The Light Warrior.

Some days it just doesn’t pay to get out of bed.

There are hundreds of do-gooders in the world. The pantheon of superheroes include such righteous dudes like Superman and Captain America, guys you couldn’t get to even jaywalk if there was no traffic.  There are also wanna-bees whose actions are good even if their motives are a bit ego-centric, like Iron Man.  Sometimes the hero is someone who has had the mantle of superhero sort of slapped on him by a twist of fate, but manage to somehow corral in the new found abilities in a way that turns out alright in the end.  Spider-Man comes to mind here. Occasionally you get some vigilante who wants to correct the system because of some deep dark past, like Batman, but for the most part they all have taken the role in stride.

Then there are the doofuses who can’t seem to get a handle on the superhero thing, even if they are well-meaning in their attentions. Sometimes these are just average dweebs who had some noble notion of being a hero, and sometimes it is just a guy who had fate hand him the role and still doesn’t know how to cope with it.

One of my favorite memories was of coming home one Friday night in 1995 and watching a made for cable feature called The Adventures of Captain Zoom in Outer Space.  The essence of this movie is that Pangea, a planet in a galaxy far far away,  is being subjected by an evil villain, Lord Vox of Vestron (Ron Perlman) (something on par with Ming the Merciless from Flash Gordon).  The leader of the rebellion is a woman named Tyra (Liz Vassey) who is at her wits end.  Her little brother, Baley (Gregory Smith), is an electronics whiz and goes looking for a solution.  He finds it in a 50’s era TV show  called “Captain Zoom”.  He uses his electronics genius to zap Captain Zoom from Earth to do battle with Lord Vox.  Unfortunately, as you can well guess, “Captain Zoom” isn’t  really a “superhero”.  He’s just an actor, Ty Farrell (Daniel Riordan), and not a superhero in any sense of the word.  But Farrell is in a serious predicament because everyone believes he is Captain Zoom and eventually he has to use what wits he has (which is not much) to help free Pangea from the clutches of Lord Vox. 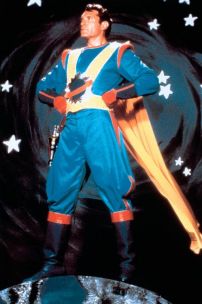 The Meteor Man is a different case.  Jefferson Reed (Robert Townsend) is a school teacher who is doing what little he can as his neighborhood is overrun by hoodlums and a drug lord, Anthony Byers (Frank Gorshin).  In a freak accident Jefferson is hit by a falling meteor and develops some amazing powers, which he incorporates to help defeat the drug lord.  but his ability to control and use his powers often causes more havoc than he is trying to stop. 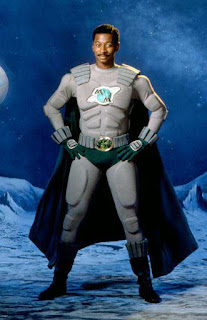 Mystery Men are a bunch of second class superheroes who really really want to be the saviors of the universe, but are hindered by the fact that they don’t have any super powers that are much good.  Mr. Furious (Ben Stiller), The Blue Rajah (Hank Azaria) and The Shoveler (William H. Macy) are being constantly upstaged by the true superhero of Champion City, Captain Amazing (Greg Kinnear), a somewhat smarmy and egotistical dilettante.  The Mystery Men recruit three other superhero wannabees, The Spleen (Paul Reubens), The Bowler (Janeane Garofalo) and Invisible Boy (Kel Mitchell) .  (Invisible Boy’s Super power is he can become invisible, but only if no one is looking at him).  The six attempt to rescue Captain Amazing who has been captured by his arch-nemesis, Casanova Frankenstein (Geoffrey Rush), but inadvertently kill him instead.  Now it is up to these third-rate dimwits to mount an attack to stop Frankenstein from his nefarious plans. 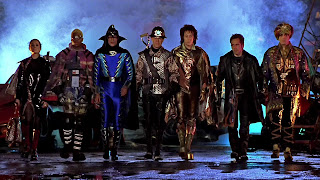 Stanley Ipkiss (Jim Carrey) is just a poor schmo who has been walked over by everyone he meets.  But Stanley has the luck (good or bad, your guess is as good as mine) to find a mask in a dumpster.  Being the average everyday ordinary guy, he puts the mask on his face.  (Yeah, OK, so you wouldn’t, and I wouldn’t, but if HE didn’t there would be no story).  The mask transforms Ipkiss into…Jim Carrey.  (OK so it transforms him into The Mask, but it is essentially Jim Carrey, and good thing too, since that’s who is playing him). Ipkiss has the usual run ins with the usual bad guys, and through a series of missteps that end up working in his favor, he, as The Mask, manages to save the day.  But is it really all in a day’s work? 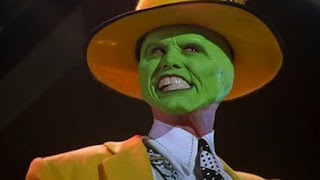 Ralph Hinkley (William Katt) is yet another dweeb with the luck of the angels, or in this case the aliens.  He’s a substitute teacher who, on a field trip with his students is given a special superhero suit by an alien force, which he is instructed to use to do good, fighting for truth, justice, and the American way. But Hinkley being the bumbling fool he is, loses the instruction manual. He becomes The Greatest American Hero, virtually by luck, since he has to learn by trial and hero how the damn thing works.  And often it is error that causes him to save the day, fortunately for him.  He never actually gets a true superhero name, but he refers to himself, on occasion, as “Captain Crash” and Captain Gonzo”.  (I guess “Super Dweeb” was already taken by some other hero). 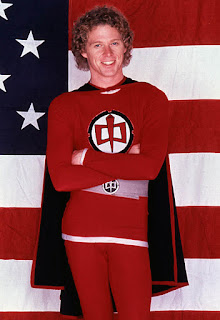 Melvin Ferd (Mitch Cohen) is just your typical 98-pound weakling, a guy who is picked on by every muscle-brained jock in the health club where he works. One fine day he is being chased around and ends up falling out a window into an inconveniently place canister of toxic waste.  What is a can of toxic waste doing outside the window of a health club? Well, how else would you get the dweeb in it?  You think he’s gonna jump in it to hide?  Ferd is transformed into a powerful superhuman creature known as The Toxic Avenger and fights bad guys, doing the job so well he becomes a hero, although not to the Mayor of the city who wants him eliminated.  (You have to watch the movie to find out why the Mayor wants him eliminated, although this comment in itself is probably a clue). 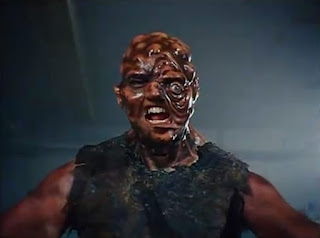 Another luckless fool who is changed by nuclear waste is Super Fuzz.  Dave Speed (Terence Hill)  is just your average Joe who has graduated the police academy and on his first mission is sent to deliver a parking ticket to a member of the local Native American reservation. (Don’t ask why he is being sent instead of leaving the ticket on the culprit’s car, it will only confuse you).  The reservation, however, has been evacuated because it is to be the grounds for a nuclear test. Dave doesn’t die from being in the middle of the bomb site, instead he is transformed with super powers.  Which he uses with some serious ineptitude, but still manages to come out on top. 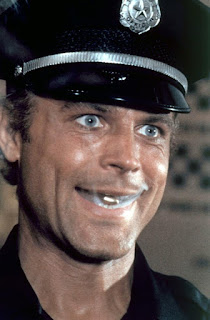 There are plenty of other heroes who just barely make the grade in the superhero world, including Blankman, a nerd who becomes a sort of poor man’s Batman (with Damon Wayans in the title role), Underdog, a crime dog reject beagle who gets exposed to various chemicals that give it super powers, an actor (John Ritter) who becomes convinced he is really the superhero he is only pretending to be (Hero At Large) and a couple of heroes that are sure to offend the more timid souls that read this blog, like Orgazmo (a Mormon who becomes a porn star superhero) and Supertwink (a gay superhero).  The world needs more humor, so why not in its superheroes?

Now if you’ll excuse me I must be off.  Time to save the world for the nuts, fruitcakes and malcontent bozos who are really my people.