Terry Gilliam is one of my favorite directors.  He has an odd sense of the world and his movies tend to be outré. His works include Time Bandits, Brazil, The Adventures of Baron Munchausen, and The Zero Theorem, all of which stretch the boundaries of reality.  I love a film that, initially, makes you leave the theater wondering just what the hell happened.  And Gilliam’s movies tend to do that to me.  Which makes them get on my list of favorite movies, as bizarre as that sounds.

I also love the concept of time travel.  Sometimes the mechanisms for initiating time travel are central to the story (as in The Time Machine) and at other times you are just expected to take it for granted that time travel is possible, but aren’t given any details about the operation of whatever machinery accomplishes the process (as in The Terminator)

12 Monkeys falls into the second category, but there is an added twist to it.  We as the viewers are hip to the idea that Bruce Willis‘ character is from the future, because we see the future world and see him given his mission.  But is that really the case?  For one thing, as would be expected, James Cole (his character), as would be expected, is thought to be insane by the modern world, because who in his right mind would claim to be from the future?  And the audience is left in suspense throughout the movie as the idea that maybe he really is insane and it’s all in his mind is hinted at during the course of the film.

The future is bleak.  The world lives underground, since at some point in the past a manufactured virus wiped out most of the population.  Criminals are given the task of going above ground to collect samples to see how the virus is progressing in hopes of it’s dissipation, so that life could be resumed above ground.  James Cole (Bruce Willis) is one of these criminals.  After a mission to topside Cole is brought before a group of scientists and given a new mission.

His goal is to go back to 1996 and discover the origins of the virus.  The future scientists believe that the originators of the virus were “The Army of the Twelve Monkeys”, mainly because the world topside is covered with graffiti that has an emblem, representing the 12 Monkeys and the words “We did it!” 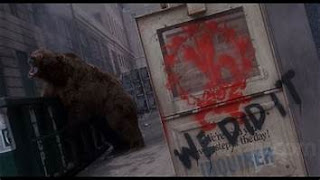 But the scientists aim is off.  Cole ends up in 1990, 6 years before the virus outbreak.  He is arrested and sent to an insane asylum, because after all, he must be crazy.  He thinks he’s from the future!  Dr. Kathryn Railly (Madeline Stowe) and her superiors put him in an insane asylum.

The asylum is where he meets Jeffrey Goines (Brad Pitt).  Jeffrey is the son of a rich industrialist, but he’s not all there. Pitt was nominated for an Oscar for this role, but lost to Kevin Spacey for his role in The Usual Suspects, a slight for which I have never forgiven the Academy.  You have to see the portrayal to get my position. 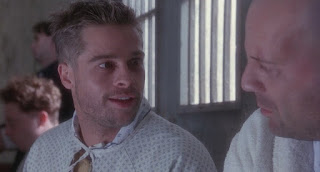 The scientists in the future are keeping an eye on Cole, and zap him out of there toot sweet. But like most people in charge, they blame Cole for screwing up the mission, even though they were the ones at fault for sending him to the wrong time.  He is asked if he wants to try again, and Cole agrees.  But they send him to a battle in the middle of World War I in France.  Screwed up again….bureaucrats!

Complicating matters is the fact that Cole is falling in love with Railly and begins to try to convince himself that all this future crap is really just in his mind.  The Gilliam touch of trying to decide just what is reality comes to play in spades.  I liken Gilliam movies to what one of my favorite sci-fi authors, Philip K. Dick (author of such works that inspired Blade Runner, Total Recall, and Minority Report).  The question remains throughout whether this is all just in Cole’s head, or if he really is from a plague-devastated future.  Further complicating his mission is the fact that in the 1996 version of the past (which is actually the present for the moviegoer), Jeffrey is now out of the mental hospital and working with his father and the scientists.  But he is still bat-shit crazy.

He is involved with an animal activist paramilitary group called the Army of the 12 Monkeys, who have a plan to create havoc on the world.  Spoiler Alert! However, it’s not to release the plague that devastates the future.

12 Monkeys was inspired by a short French film, called La Jetee and if you find this movie interesting, checking out that movie ought to be next on your list.  The similarities are there in black and white, and it serves as a pretty good accompanying piece to the film.

The film has lost none of its impact in the past 20 years, although it is somewhat hampered by the fact that Gilliam chose to use a “quote” from a scientific journal at the preface of the movie stating that a man who claimed to be from the future predicted that the world would be devastated by a plague in 1996.  In 1995 it may have been a bit Twilight Zone-ish, but now it just hangs there as part of a film, not as an ooo-weee-ooo type thing.  Of course, Y2K and 2012 turned out to be duds, too, but the initial effect was a bit more dramatic at the time.