Can you believe that everyone’s favorite green movie star is about to turn 60 years old this fall?

No, we’re not referring to Shrek, Kermit the Frog, or the Incredible Hulk. We’re talking about the people-chompin’, Tokyo- stompin’, planes, trains and automobiles-whompin’ monstrosity from the Land of the Rising Sun known as Godzilla!

This towering titan of terror made his big-screen debut in 1954. Originally tagged in Japan as Gojira (a name that combines the Japanese words for “gorilla” and “whale” and was apparently the nickname of a hefty Toho studio employee), the 150-foot-tall (his height would vary over the years) critter was blown out of its hibernation in the sea after Earth-shattering nuclear testing. The behemoth rises from the watery depths with a rather anti-social temperament and radioactive breath that a million gallons of Listerine wouldn’t cure. The monster’s appearance affects the lives of everyone in Tokyo, but the film hones in on four people: a paleontologist, his daughter, and the two guys who are attracted to her, a soldier and a scientist.

Like many of Hollywood’s “atomic mutation” science fiction films of the ’50s (The Beast from 20,000 Fathoms, Them!, The Amazing Colossal Man, etc.) Gojira and many of its sequels and spin-offs not-so subtly delved into the real-world paranoia of the Cold War and nuclear bombs. But since the setting was Japan, less than a decade after Hiroshima and Nagasaki, the devastation held more impact for filmgoers, especially in that part of the world. The story is told by director Ishiro Honda in straightforward fashion, grimly in black-and-white. Its success skyrocketed Toho Films to large profits, with over 9 million admissions in Japan alone. Of course, the movie was changed fairly radically when released a few years later for American audiences. Ten minutes were clipped, 20 minutes of new footage featuring Raymond Burr as a reporter (named Steve Martin, no less) were added, and Gojira was rechristened Godzilla, King of the Monsters.

The film’s international success spurred all sorts of “daikaiju” (big monster) extravaganzas from Japan, most of which took on high-camp entertainment value when their (often badly) dubbed versions made it stateside. Godzilla (who was seemingly destroyed at the end of the first movie) came back to battle Anguirus, King Kong (!), and an over-sized moth named Mothra, and slowly changed from being a havoc-wreaking menace to Earth’s protector. He also picked up a son, Minilla, along the way, and by the ’70s was duking it out with such of-their-time foes as Hedorah the Smog Monster and the bionic Mechagodzilla. After the long-running Toho series of films ended with 1995’s Godzilla vs. Destroyah, America got into the act with German-born director Roland Emmerich ’s 1998 version of the story, in which the Not-So-Jolly Green Giant–looking like a cross between a Jurassic Park T-rex and the Alien Queen from Aliens–hit New York City and caused more ruckus in Madison Square Garden than Lady Gaga at a Knicks game. Five more Japanese entries would follow, the last being 2004’s Godzilla: Final Wars.

So, as he gets ready to blow out the candles—easy on the fallout , big fella—on his 60th birthday cake, and as Warner Bros. and director Gareth Edwards debut their spin on the legendary tale of man versus monster, we look up to the sky, point and shout “Ho, Godzilla!” Guess you just can’t keep a good beast down.

Oh, and by the way, the only place you’ll find Godzilla battling Miley Cyrus is on this weekend’s “most popular web search” sites. But in the meantime, please enjoy the classic 1969 animated short (and we do mean short) Bambi Meets Godzilla: 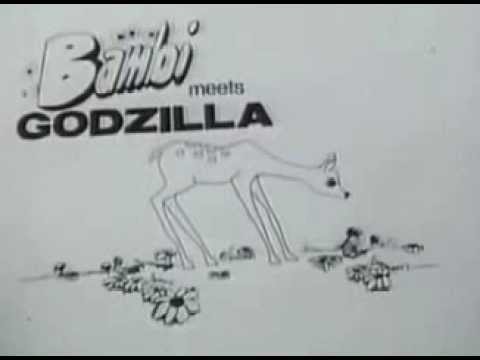 Can you think of a clever quip to go with the Godzilla Create-a-Caption photo supplied by Jason here?

Guest blogger Sark reviews the film that started it all, 1954’s Gojira, and compares it to its ’56 U.S. version.

Interested in Godzilla memorabilia? Check out “Movie Irv” and friends as they take a video look at what your Godzilla collectables are worth.

MovieFanfare’s own Dr. Strangefilm offers his expert diagnosis of the bizarre 1967 Toho series entry Godzilla’s Revenge, where the Big G’s son teaches a little boy a lesson in courage.