Films are by far the most marvelous means of personal escapism and during the 1940s, a time of war, anxiety, and sorrow, the American people certainly needed a place to escape to. Hollywood, being a most benevolent servant of the Arts, created and then delivered us to our destination. They gave us the storybook English village – idealistic communities home to gentle townsfolk such as the local minister, the elderly matriarch (often played by the great Dame May Whitty), the gossiping storekeeper and the kindly bartend. 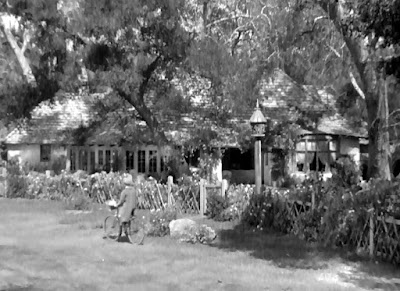 With their winding gravel paths, gentle meandering ravines, and stately oaks, these English villages were our perfect refuge. Charming, compact, and inviting, they represented tradition, tranquility, neighborliness and, most importantly, solidity….something majestic England herself felt she was losing.

The English village setting originated from Universal Studios and can almost be single-handedly attributed to the talent of one man : Charles D. Hall. As an art director for the studio between 1925 and 1936, he had created some of the earliest one-street village settings in pictures such as Dracula (1931), The Invisible Man (1933), and Frankenstein (1935). These marvelous re-creations of European hamlets were later used in part for the Sherlock Holmes series starring Basil Rathbone and Nigel Bruce, made during the 1940s. This is especially evident in Sherlock Holmes Faces Death when, outside “The Rat and the Raven Inn”, we see the familiar Vasaria archway of The Ghost of Frankenstein (1942).

Metro Goldwyn Mayer later became renowned for their picture-postcard cobblestone villages as well. Although the studio had a separate production facility in the very heart of merry ol’ England (MGM British Studios) it was still more economical for them to build outdoor sets in Hollywood rather than to send their major stars overseas. Hence, the quaint Devon countryside setting of Random Harvest (1944), the little town of Penny Green in If Winter Comes (1942), and the stunning Technicolor replica of the English coastal village of Sewels in National Velvet (1943) were all in fact filmed in sunny California. 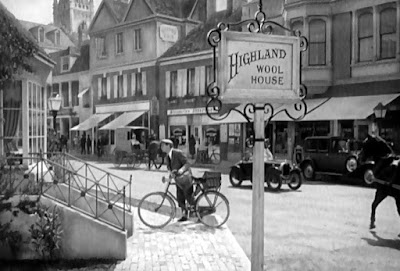 The legendary art director Cedric Gibbons created the most picturesque of these sets, as well as “fronts” to numerous stately manors in films such as Pride and Prejudice (1937), The Canterville Ghost (1944), and The White Cliffs of Dover (1944).

Another well-known art director who was famous for village settings was Richard Day. Among his 263 film credits were The Ghost and Mrs. Muir (1947) with its classic seaside village of Whitecliff, and the rugged Welsh mining town in How Green Was My Valley (1941).

Alas, the conclusion of World War II brought an abrupt end to the English village setting. Soldiers were returning home and had jobs, wives, and babies to cope with and “escapism” was no longer the necessary desire of movie-going audiences. Color, glamour and music were the new hungers of the American people, as were gritty realistic dramas. Location-filming was also becoming more economical and these artificial sets were no longer needed.

At least celluloid captured these marvels of set design for posterity, so today we can travel back in time at any moment to visit these pleasant oases of a bygone era…..villages that us Anglophiles hope still exist.