It sure feels like it’s been a rough summer for Baby Boomer movie/TV fans like yours truly. Over the last few months we’ve lost, among others, horror legend Christopher Lee; the dad from Eight Is Enough (Dick Van Patten); The Avengers’ ever-dapper John Steed (Patrick Macnee); a pair of pro wrestling icons (Dusty Rhodes and “Rowdy” Roddy Piper); the original Batgirl (Yvonne Craig); and Disney live-action star Dean Jones. Now came word over Labor Day weekend that two more small-screen notables from the ’60s, Laugh-In regular and “Sock It to Me” gal Judy Carne and Route 66 and Adam-12 co-star Martin Milner, passed away.

A lot has been written and said this week about Milner, who died of heart failure at his Southern California home at the age of 83. A Detroit native, his family moved west when Martin was a boy and he began acting in children’s theater in Washington state and California. His first screen appearance came as one of William Powell and Irene Dunne’s sons in the 1947 comedy favorite Life with Father. After a year spent recovering from polio, Milner resumed his career with small roles in such films as Sands of Iwo Jima, Halls of Montezuma (where he and co-star Jack Webb struck up a lifelong friendship), Alfred Hitchcock’s Dial M for Murder and John Ford’s The Long Gray Line.

He was also the jazz musician who incurs the wrath of newspaper columnist J.J. Hunsucker (Burt Lancaster) by dating Hunsucker’s sister in Sweet Smell of Success; played younger brother James Earp to Lancaster’s Wyatt in Gunfight at the O.K. Corral; vies with Gene Kelly for Natalie Wood’s attention in Marjorie Morningstar; and was stage actress Patty Duke’s husband in the cult classic Valley of the Dolls. To ’60s couch potatoes and young spuds, however, the clean-cut and square-jawed Milner will probably best be remembered as Yale grad Tod Stiles, who was joined by travelling companion Buz Murdock (George Maharis) as they roamed the country in a Corvette convertible along Route 66, or as veteran LAPD officer Pete Malloy, teamed with rookie patrolman Jim Reed (Kent McCord), in Jack Webb’s Adam-12.

Not by me, though. The Martin Milner performance that played most prominently in my mind when I heard of his passing was one that came early in his career and only lasted for a couple of minutes. It comes roughly midway into the beloved 1955 WWII seriocomedy Mister Roberts, as the crew of the Navy supply vessel USS Reluctant are enjoying–some a little too enthusiastically–a long-overdue shore leave on an Edenic South Seas island. Executive officer Lt. Doug Roberts (Henry Fonda) watches as a truck pulls up along the pier and Shore Patrolmen surround the gangplank. The SP officer (a wonderfully subdued Milner, doing a laconic Southern drawl that’s always reminded me of Daws Butler’s wolf in those ’50s Droopy cartoons) comes on board and explains to Roberts what’s happened and why the Reluctant has been placed under “dock arrest”:

Roberts: “What in particular did this?”

SP Officer: “Well, a little while ago, six men from your ship broke into the home of the French Colonial Governor. They started throwing things through a plate glass living room window. We found some of the things on the lawn: large world globe, small love seat, a lot of books, and a bust of Balzac…the French writer? We also found an Army private, first class. He was unconscious at the time. He claims they threw him, too.”

Roberts: “Through the window?”

SP Officer: ” That’s right. It seems he took them there for a little joke. He didn’t tell ’em it was a governor’s house. He told ’em is was, uh… well, what we call in Alabama a…”

Roberts: “Yeah, we call it the same thing in Nebraska.”

SP Officer: “Well, that’s about all, Lieutenant. If it makes you feel any better, Admiral Wentworth says this is the worst ship he’s ever seen in his en-tire naval career. Good night, Lieutenant.”

A snappy salute and Milner is on his way. It’s a classic “blink-and-you-miss-it” performance, and in a movie that showcases four of Hollywood’s finest leading men (Fonda, James Cagney, Jack Lemmon and William Powell), the young actor manages to make a lasting impression in less than three minutes of screen time. Thanks, Martin. 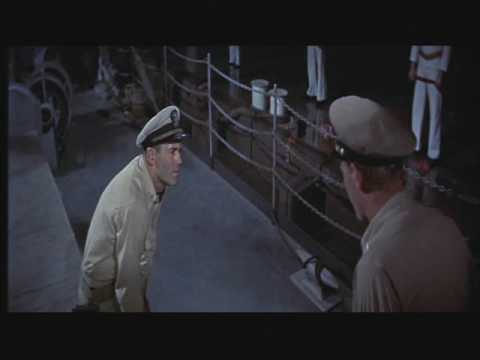