Quality—not quantity—defined Barbara Bel Geddes’ career in film and television. She only made 12 films, but two of them are beloved classics: I Remember Mama and Vertigo. On the small screen, she starred in possibly the most famous episode of Alfred Hitchcock Presents and became a household name to a new generation in the 1980s as “Miss Ellie” Ewing on Dallas.

Bel Geddes, whose father was an architect and stage designer, fell in love with the theatre at an early age. She was 18 when she made her Broadway debut as Dottie Coburn in the 1941 comedy Out of the Frying Pan. When she won a 1947 New York Drama Critics Award for Deep Are the Roots, Hollywood came calling.

Bel Geddes made her film debut opposite Henry Fonda and Vincent Price in The Long Night (1948), a remake of the brooding 1939 French classic Le Jour se lève. The following year, Bel Geddes landed her most memorable film role as Irene Dunne’s daughter in I Remember Mama, a heartfelt ode to motherhood. She received an Academy Award nomination for Best Supporting Actress.

After solid performances in Panic in the Streets (1950) and Fourteen Hours (1951), Bel Geddes’ film career stalled when she was investigated by the House Committee on Un-American Activities. Although she was not one of “The Hollywood Ten”, she turned her focus back to the theatre, where she appeared on Broadway in The Moon Is Blue and The Living Room. In 1956, Bel Geddes earned raves as Maggie the Cat in the original stage version of Tennessee Williams’ Cat on a Hot Tin Roof. She earned Tony Award nominations for Williams’ play and for the 1961 comedy Mary, Mary.

She returned to Hollywood in 1958 to star in Alfred Hitchcock’s masterpiece Vertigo. She played Midge, James Stewart’s quietly-suffering female friend who longed to be more than just a friend. The part eventually led to four appearances on Hitch’s TV series Alfred Hitchcock Presents. The best of those episodes—indeed, one of the best in the series’ entire run—was “Lamb to the Slaughter.” It featured Bel Geddes as a woman who kills her cheating husband with a frozen leg of lamb. (There’s more to the story, but no spoilers here!)

By 1978, Bel Geddes was working sporadically when she was offered the part of matriarch Ellie Ewing in the CBS prime time soap Dallas. When the show blossomed into a ratings behemoth, she became known to a whole new generation as simply “Miss Ellie.” The part earned her an Emmy Award for Outstanding Lead Actress. She left Dallas after heart surgery in 1983 and was replaced by Donna Reed. When viewers rejected the “new” Miss Ellie, Bel Geddes was convinced to return to the role until shortly before Dallas left the airwaves in 1991.

Barbara Bel Geddes subsequently retired to Maine. She died of lung cancer in 2005. She was married twice.

Sit back and enjoy Barbara in one of her most remembered roles in the theatrical trailer for I Remember Mama: 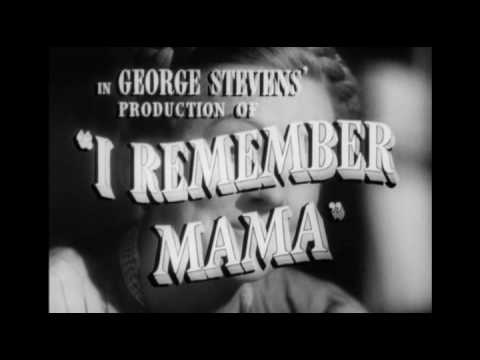