American cinema’s dominant male lead through the 1930s, the deservedly crowned “King of Hollywood” defined manliness for a generation through his portrayals of charming and self-assured rogues and ruffians. Born in Cadiz, Ohio in 1901 to working-class German-American parents, William Clark Gable was less than a year old when his mother passed away. Moving with his father and stepmother to a northeast Ohio farm when he was a teen, Gable was forced to drop out of high school and help support his cash-strapped family by laboring at the B.F. Goodrich plant in Akron. It was around that time that he also attended his first stage play, and after receiving a modest inheritance at age 21, he spent the next few years knocking across the country with a series of theater companies and through a string of odd jobs. In Portland, Oregon, he came under the tutelage of acting coach Josephine Dillon; the much-older woman married him, polished his appearance and performing skills, and staked a mid-’20s sojourn to Hollywood.

Two years there yielded no more than extra work in White Man (1924), 1925’s Ben-Hur and The Merry Widow, and a handful of other pictures, and Gable returned to stock work on the stage. His perseverance lead to a successful 1928 Broadway debut in “Machinal”; he followed with a road-company triumph in the Los Angeles production of “The Last Mile,” taking on the role that had made Spencer Tracy’s name in New York. West Coast casting offices took notice, and after a rejection from Warner Brothers that would become notorious (a “big ape” with “taxi-door ears,” Jack Warner harumphed), he procured a contract from Metro-Goldwyn-Mayer in 1930.

Divorcing Dillon and marrying another older woman, Maria Langham, Gable got his first featured talkie role as the heavy in the low-budget William Boyd oater The Painted Desert (1931). It didn’t take long for the strikingly virile player’s career momentum to snowball; later that year Joan Crawford requested him for Dance, Fools, Dance, leading to seven more screen collaborations and an on-again, off-again affair of long standing. The notices stepped up after he played the abusive gangster desired by Norma Shearer in A Free Soul (1931), and the supporting gigs thereafter became a thing of the past, as he became the go-to romantic object for MGM’s stable of luminary leading ladies.

Over the next few years, he’d romance the glamorous Greta Garbo in Susan Lenox: Her Fall and Rise (1931), then successfully re-team with Crawford as they sank to scandalous depths of moral turpitude in Possessed (1931) and trod the Broadway boards in the musical comedy Dancing Lady (1933). Another reunion–this time with Shearer–came in 1932 with Strange Interlude, a well-acted film treatment of Eugene O’Neill’s tragedy. And Gable got on famously with platinum blonde Jean Harlow, whether it was in a gritty crime drama (1931’s The Secret Six) or an adventure set in the jungles of Southeast Asia (1932’s Red Dust, which the actor would remake 20 years later as Mogambo). Rumors were rampant about his affairs with his comely co-stars, and when hearing about it, a very frank Gable offered, “Hell, if I’d jumped on all the dames I’m supposed to have jumped on, I’d have had no time to go fishing!”

Gable quickly became an attractive chip for MGM to loan out to other studios, as evidenced by 1931’s Night Nurse (opposite Barbara Stanwyck) for Warner Brothers and 1932’s  No Man of Her Own (opposite future wife Carole Lombard, in their only co-starring effort) for Paramount. He had been particularly dreading one such arrangement for the then-Poverty Row outfit Columbia Pictures. However, the resulting effort–the enduringly charming romantic farce It Happened One Night–resulted in Academy Awards all around for Gable, co-star Claudette Colbert, director Frank Capra, and the studio for 1934’s Best Picture.

His star would burn the brightest over the balance of the decade, as MGM continued to profitably pair him with Crawford in Chained (1934), where Gable was her forbidden fruit, and when he vied for Joan’s hand against Robert Montgomery in Forsaking All Others (also ’34). Clark was back with Harlow for the comedic adventure China Seas (1935) and Jean’s final film, Saratoga (1937), and he, along with Jeanette MacDonald and Spencer Tracy, rode out the legendary 1906 earthquake that rocked San Francisco (1936).The actor even tried his hand at song and dance with Shearer in the 1939 curio Idiot’s Delight.

Show biz columnist and future TV host Ed Sullivan must have known what he was doing when he crowned Gable and Myrna Loy the King and Queen, respectively, of Hollywood, because the duo would co-star in six classic films from 1934-38: Manhattan Melodrama, with William Powell; the medical drama Men in White; Wife vs. Secretary, a romantic romp that also featured Harlow and James Stewart; the historical biodrama Parnell; the high-flying Test Pilot; and Too Hot to Handle, also starring Walter Pidgeon. On his “royal” status, Clark once commented, “I don’t believe I’m king of anything, but I know why they like to think I am. I’m not much of an actor, but I’m not bad unless it’s one of those things outside my comprehension. I work hard. I’m no Adonis, and I’m as American as the telephone poles I used to climb to make a living.” Even so, Gable’s star appeal was such that he could liven up a film without even being in it, as a 15-year-old Judy Garland proved when she sang “You Made Me Love You” to a photo of the actor in MGM’s The Broadway Melody of 1938.

It was during this period that Clark would also accrue his last career Best Actor Oscar nominations for two of his most iconic performances: as Fletcher Christian, the rebellious first mate to Charles Laughton‘s Captain Bligh. in 1935’s Best Picture winner, Mutiny on the Bounty; and the rakish Southern rogue and Civil War profiteer Rhett Butler, who tries to win the love of Vivien Leigh‘s free-spirited Scarlett O’Hara, in David O. Selznick’s 1939 blockbuster Gone with the Wind. 1939 also marked an off-screen highlight for Gable, as a divorce from second wife Langham meant he was free to wed Carole Lombard, with whom he had had a three-year relationship.  “You can trust that little screwball with your life or your hopes or your weaknesses,” he said about his new bride, “and she wouldn’t even know how to think about letting you down.”

Gable began the 1940s with his career heat unabated and continued to be MGM’s on-screen squire for their next wave of feminine talent like Hedy Lamarr (1940’s Boom Town and Comrade X) and Lana Turner (1941’s Honky Tonk and Somewhere I’ll Find You in 1942). His personal life took a tragic turn in 1942, when Lombard perished in a plane crash while on a WWII bond drive; the grief-stricken performer thereafter enlisted in the Army Air Corps, and participated in aerial combat in Europe until his discharge with the rank of Major in 1944.

His first project back for MGM, 1945’s Adventure with Greer Garson, featured posters that proclaimed, “Gable’s Back and Garson’s Got Him!” Unfortunately, it was a notorious misfire, and while he’d remain with Metro for another decade, the critical and box-office returns would be mixed; the high points from this era include The Hucksters (1947), a scathing look at the advertising game; Homecoming (1948), a  wartime romantic drama; Command Decision, a ’48 military tale where he faced the realization that success could come with a high body count; and 1953’s Mogambo, the last of his three films co-starred with Ava Gardner. Betrayed (1954), Clark’s final MGM effort, reunited him with Turner in a first-rate WWII spy thriller.

During this time, he was briefly wed to Silvia Ashley, widow of Douglas Fairbanks; he entered his last marriage with actress Kay Williams in 1955. Finally a freelance, but well conscious of his advancing age, Gable soldiered on through the remainder of the ’50s, with notables including The Tall Men, a 1955 Fox western opposite Jane Russell and Robert Ryan; 1956’s The King and Four Queens with Eleanor Parker for United Artists; Run Silent, Run Deep (1958), with submarine commander Clark locking horns with first officer Burt Lancaster in a taut WWII drama; Teacher’s Pet (also ’58), a romcom which brought him together with Doris Day; and 1960’s It Happened in Naples, where American lawyer Gable falls for his late brother’s widow, Italian dancer Sophia Loren.

Years of hard living, and crash dieting to stay in shape, finally caught up with the 59-year-old screen idol. Shortly after wrapping one of his finest performances, as the aging cowhand in John Huston’s modern-day frontier drama The Misfits (1961), Gable died of a heart attack (in a chillingly ironic statement, the actor said that co-star “Marilyn Monroe nearly gave me a heart attack. I have never been happier when a film ended”). He did, however, know a good role when he saw one, and recognized the film’s importance when he stated, “This is the best picture I have made, and it’s the only time I’ve been able to act.”

When it came to funeral plans, Clark Gable once said, “When I die, don’t let them make a circus out of it…I don’t want a lot of strangers looking down at my wrinkles and my big fat belly when I’m dead.” He needn’t have worried, because, more than 50 years since his passing, movie fans old and young think only of the handsome Southern gentleman at the bottom of the stairs with an roguish smile and a twinkle in his eye.

Now, hail “The King,” in his most famous role as Rhett Butler, in the theatrical trailer for Gone with the Wind: 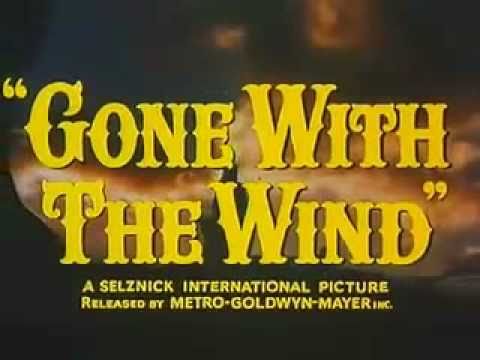