Often intense in his characterizations, always unpretentious in his craft work, darkly handsome Canadian transplant Glenn Ford enjoyed a long career in Hollywood and a preeminent position amongst the post-WWII generation’s leading men. Born in Quebec City in 1916 to a railroad executive father and a mother of Welsh ancestry, Gwyllyn Samuel Newton Ford was eight when the family relocated to Santa Monica. He’d nurtured an interest in acting since adolescence, and his family signed off on his post-high school pursuit of roles in stock as long as he developed tradeable skills in construction and home repair which he’d hone for a lifetime.

After making his film debut as the emcee of a 1937 Paramount musical short, Night in Manhattan, young Gwyllyn would–armed with a new stage name drawn from his dad’s hometown of Glenford–catch the eye of a Fox talent scout in 1939 and get his first feature role later that year, in the “B” drama Heaven with a Barbed Wire Fence. The performance resulted in a contract from Columbia Pictures, and Ford spent the early ’40s building a resumé (if not a lot of career traction) with such fare as 1940’s The Lady in Question, the first of five pairings with sultry Rita Hayworth; So Ends Our Night with Fredric March and Texas with William Holden and Claire Trevor (both ’41); The Desperadoes (1943) with Trevor and Randolph Scott; and as a young sailor at odds with crusty old Navy man Edward G. Robinson in Destroyer (also ’43).

By the time Destroyer was released, Ford has already tabled his career to volunteer with the Marine Corps, where he would serve in USMC film and radio programs until he was honorably discharged for health reasons in late 1944. It was also during this time that the actor met his first wife, dancing legend Eleanor Powell.

Returning to Hollywood at war’s end, the now less-callow performer began to get more substantive roles. He demonstrated considerable chemistry opposite Lady in Question co-star Hayworth in the noirish romance classic Gilda (1946), and that same year served as the fulcrum of the fatal love triangle with Bette Davis’ twin sisters in A Stolen Life. Glenn tried to avoid being the fall guy for Janis Carter and Barry Sullivan in Framed (1947); re-teamed with Holden in another western as The Man from Colorado (1948); and later that year played opposite Hayworth in the steamy, but decidedly non-operatic, The Loves of Carmen.

In a 1949 loan-out to MGM, he was a young medico who weds patient Janet Leigh, leading to a family rift, in The Doctor and the Girl; and he was a 19th-century prospector whose Lust for Gold (also ’49) led him to discover the fabled Lost Dutchman mine. His film noir contributions included his being threatened by the mob as The Undercover Man (1949) and, as Mr. Soft Touch (also ’49), hiding out in Evelyn Keyes’ settlement house, and Ford found himself behind bars when he was wrongly Convicted (1950) of manslaughter.

Glenn Ford and Gloria Grahame in
The Big Heat (1953)

Ford would remain busy throughout the early ’50s, with the best results coming as golfing great Ben Hogan in the biodrama Follow the Sun (1951); in an Affair in Trinidad (1952) with old flame Hayworth; opposite former Gilda nemesis George Macready in the post-WWII adventure The Green Glove (1952); and in director Fritz Lang’s knockout 1953 noir drama The Big Heat, where tough cop Glenn tried to protect Gloria Grahame from villain Lee Marvin. He was branded a coward for his actions at the doomed Texas fortress in The Man from the Alamo (1953). That same year found travelers Ann Sheridan and Zachary Scott trapped in the Central American jungle with Ford in Appointment in Honduras, while Glenn hunted for hidden Mexican treasure in Plunder of the Sun. Ford was contracted to play the lead in Hondo, but upon hearing that John Farrow–with whom he had clashed on the set of Plunder of the Sun–had signed on as director, he backed out (John Wayne eventually played the role).

With his turn as the earnest teacher striving to get through to inner-city high schoolers in Richard Brooks’ charged 1955 classic Blackboard Jungle, also starring Hollywood youngster Sidney Poitier in one of his early roles, Ford finally found himself among the industry’s elite earners, and would ride that success for a decade (on his popularity, he offered, “People laugh when I say I’m not an actor, but I’m not, I just play myself.”). In 1955’s frontier drama The Violent Men, Glenn co-starred with Edward G. Robinson and Barbara Stanwyck, and later in ’55 he helped Eleanor Parker rise above her handicap in the sensitive true story of Australian opera singer Marjorie Lawrence, Interrupted Melody.

His comfort level with westerns remained evident, as he continued to mark it with Jubal, opposite screen heavies Ernest Borgnine and Rod Steiger, in 1956, while Van Heflin tried to bring Ford to justice in the classic psychological sagebrusher 3:10 to Yuma (1957). 1956 also found him cast as The Fastest Gun Alive, the reluctant heir to his father’s legacy for being incredibly quick on the draw. Oddly enough, the actor was widely known to have actually been “the fastest gun” in Hollywood movies, being able to draw and shoot in 0.4 seconds — faster than John Wayne or Gunsmoke star James Arness. “The western is a man’s world and I love it.” Glenn once said to explained his affinity for the genre

1958’s entertaining frontier drama Cowboy, also starring Jack Lemmon, examined a romanticized image of Old West life; and, that same year, in the lighthearted comedy western The Sheepman, Glenn aimed at winning the heart of feisty pioneer gal Shirley MacLaine. Cimarron (1962) was a epic remake of the 1931 Best Picture Oscar winner, and Ford teamed with Henry Fonda in a modern-day sagebrush comedy, The Rounders (1965). Other notables from this phase include Ransom! (1956) with Donna Reed; The Teahouse of the August Moon (also ’56), opposite Marlon Brando; 1957’s Don’t Go Near the Water, a rip-roaring military farce about Navy press officers on a remote South Seas island during World War II; and a more serious WWII tale, the submarine actioner, Torpedo Run (1958), with Borgnine.

Glenn Ford and Henry Fonda in The Rounders (1962)

His star continued to rise in a pair of inventive 1959 comedies opposite Debbie Reynolds: The Gazebo and It Started with a Kiss. Ford produced and starred as gangster Dave the Dude in director Frank Capra’s farewell film, 1961’s Pocketful of Miracles, reuniting with Bette Davis after a 15-year hiatus. He said of Capra, “Hell, no actor is going to tell Frank Capra how to make a picture. He has forgotten more about movie-making than most directors ever know.” There was some controversy on the set, though, when Glenn pushed for girlfriend Hope Lange to play his romantic lead over Capra’s choice for the part, Shirley Jones. Lange, who had recently separated from then-husband Don Murray, stayed with Glenn through their next film together, the 1963 romcom Love Is a Ball.

Ford’s box-office appeal was still evident when he co-starred in the taut Blake Edwards thriller Experiment in Terror (1962) with Lee Remick. The searing drama of The Four Horsemen of the Apocalypse (also ’62) updated the action of the story–originally told set against the background of World War I– to WWII Paris. One of his most endearing ’60s roles was as the title widower of 1963”s The Courtship of Eddie’s Father, which featured a young Ron Howard as Glenn’s matchmaking son. As the ’60s waned, Ford continued well into middle age, but  the critical and financial returns on his big-screen projects began to diminish. One of his last big successes was Advance to the Rear, a hilarious 1964 comedy set during of the Civil War. The following year found him in the last of his five pairings with Hayworth, The Money Trap. More roles followed but were less demanding: Gen. Omar Bradley in Is Paris Burning? (1966);  a doctor bitten by a rabid dog in Rage (1966); and a frontier town marshal in The Last Challenge (1967), among others.

The ’70s found him segueing largely into TV work, with single-season stints headlining 1972’s Cade County and 1975’s The Family Holvak. Telefilms of note included  the 1970 suspenser The Brotherhood of the Bell, The Disappearance of Flight 412 (1974), the mini-series Once an Eagle (1977), and a 1979 Louis L’Amour western epic, The Sacketts, which co-starred Tom Selleck and Sam Elliott. The occasional big-screen turn would present itself as well, with standouts including the 1976 WWII actioner Midway; as Pa Kent in the 1978 comic book epic Superman; and–in one of the odder turns of his career–as a psychiatrist in the early “slasher flick” Happy Birthday to Me (1981). Thereafter, Ford would work intermittently until 1991, when health issues forced him to hang up his spurs; his last credit came in the 1991 made-for-TV legal drama Final Verdict.

Ford had been slated to attend a May, 2006 90th birthday celebration, which would have marked his first public appearance in 15 years, at Hollywood’s Grauman’s Egyptian Theatre. The gala event had to go onw without him, though; Having suffered a series of minor strokes after his retirement, there were fears that the actor would be too frail to attend. As part of a videotaped message sent to thank those in attendance, he said, “I wish I were up and around, but I’m doing the best that I can. There’s so much I have to be grateful for.” Glenn would pass away at his Beverly Hills home three months later in August When asked how he would wished to be remembered, the veteran star simply said, “He did his best and he believed in God.”

See for yourself if Glenn Ford really had the quickest draw in Hollywood in the 1958 theatrical trailer for The Fastest Gun Alive: 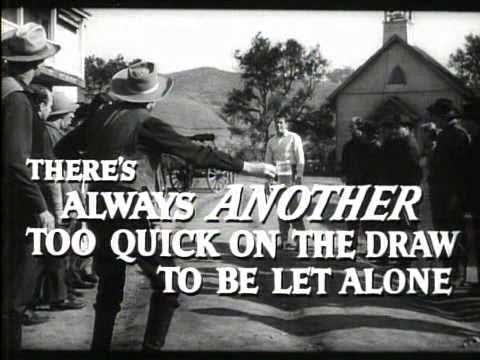