From attacking snowmen to nearly killing her pregnant mother,  Margaret O’Brien can really put a damper on the Christmas season. Her brattiness particularly shines through in two Christmas films Meet Me in St. Louis (1944) and Tenth Avenue Angel (1948):

“Meet Me in St. Louis,” a personal favorite, is simply the story of a family, set in the early 1900s when the World’s Fair is coming to St. Louis. The family has four daughters: Rose (Lucille Bremer), Esther (Judy Garland), Agnes (Joan Carroll) and Tootie (Margaret O’Brien)

Though Garland is the true star of this film, O’Brien steals several scenes by simply being a brat.

I’m fairly convinced that Tootie manipulates her family by being an obnoxious brat and turning on the waterworks in order to get what she wants.

At the start of the film, Tootie tells the iceman (Chill Wills) that her doll has “four fatal diseases” and how she will bury her and have a funeral for a perfectly good doll (maybe this is just a ploy to get new toys?).

At Halloween she really is a little hellion. She throws flour in the face of an unsuspecting neighbor and shouts “I hate you!”-part of a turn-of-the-century Halloween tradition that we never should bring back.

Tootie and Agnes stuff a dress and put it on the trolley tracks. John Truitt drags Agnes and Tootie out of the way so they don’t get hurt or caught by police. As a result, Tootie splits her lip and loses a tooth.

She is carried into the house sobbing and saying, “John Truitt tried to kill me!” prompting Esther to go next door and beat him up. Her family comforts Tootie by letting her wear one of Esther’s nightgowns and giving her a gigantic piece of cake (has anyone else noticed cake in classic films is HUGE?). Even after her mother (Mary Astor) discovers Tootie was lying, they let her keep the cake and nightgown, because she was a “good girl when the doctor was there.”

But the real clincher is the Christmas scene.

Understandably, Tootie is upset about leaving their home in St. Louis to move to New York. Esther comforts her younger sister by singing “Have Yourself a Merry Little Christmas.”

Does this calm the child down? No! Inexplicably, she runs outside in the snow after midnight, starts attacking snowmen they worked so hard to build earlier that day.

Because of Tootie’s crazed snowman moment, father (Leon Ames) changes his life plans to make his family happy, again Tootie getting her way.

Flavia was told that Susan’s boyfriend Steve (George Murphy) has been on a trip around the world but really he has been in jail.

Other harmless white lies and old wives tales are told to Flavia such as mice turn into money, cats all have nine lives and wishes on stars come true. When Flavia finds out none of these are true- including that Steve really didn’t travel around the world- she is sent over the edge.

“If it isn’t the truth then it’s a lie, isn’t it,” she says to her pregnant, bed-ridden mother. “I don’t know who to believe or what to believe. Everybody lies to me.”

In a Margaret O’Brien moment of hysterics complete with sobbing, she runs out of the apartment with mother running behind her, who falls down the stairs and becomes ill…basically because of Flavia.

However, regardless of her bratty moment, Flavia finds a miracle in order to save her mother.

The movie ends ridiculously with Flavia and Steve waiting at the stroke of midnight on Christmas morning to see if a cow will kneel to honor the newborn king-another old wives tale her mother told her.

If the cow kneels, it will be a miracle to make her mother better and will restore Flavia’s faith in her family. Lo and behold, the cow kneels and everyone lives happily ever after.

Maybe I’m being unnecessarily harsh because I’m simply not a fan of Margaret O’Brien. I’m not sure if O’Brien is the brat or if it’s the characters, but regardless I can’t take the sobbing and would be really angry if a hysterical little girl knocked down my snowman.

Jessica Pickens is the writer for Comet Over Hollywood Blog. The blog explores everything from classic actress beauty tips to celebrities from the Carolinas. Outside of blogging, Jessica is a reporter at The Shelby Star in Shelby, N.C. You can visit her on Facebook and follow her on Twitter @HollywoodComet.

And now, MovieFanFare offers more from Margaret O’Brien in the theatrical trailer for 1945’s Our Vines Have Tender Grapes: 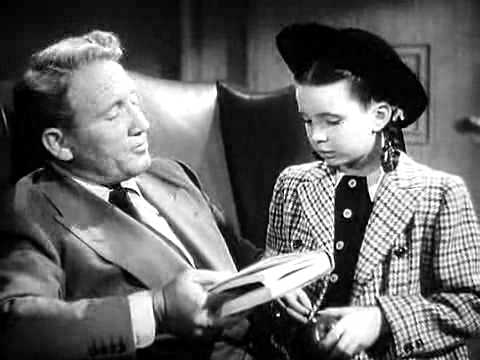