It’s a green day for golf and nostalgia fans with Golf Mania!, the latest in the fine line of archival short films in the series Lost & Rare Films and TV series from Festival Films.

This smorgasbord of rarely seen footage is enough to make enthusiasts get into their comfy, game-playing clothing, grab their club-stuffed bags and take to the links. And there’s not a cinematic sandtrap in sight.

Eight entries on the 130 min.-plus DVD showcase celebrities and golf greats joking around, teeing off and generally displaying their love for the sport.

“Golf Magic,” a 1948 short, centers on the oddities of the green scene like Native Americans teeing off, toddlers tackling putts, folks in bathing suits on skis going “clubbing” in the snowy mountains, champion Jack Redmond showing off his array of unusual putters, drivers, wedges, irons and drivers, and Jack Montague—considered one of the best of the 1930s—impressing with amazing trick shots.

Montague, a mystery man of sorts who never went pro, was a friend of Bing Crosby, and “Der Bingle” is featured throughout Golf Mania!  In addition to “Goofy Golfers Newsreel,” Crosby can be caught in “Rough but Hopeful,” a real 1946 rarity boasting appearances by Bob Hope, Jack Benny (who does a routine with an ambulance), Randolph Scott, William Bendix, Jack Carson, Johnny Weissmuller, Don Ameche, Jack Oakie, Broderick Crawford, Mickey Rooney and celebrity archivist Ken Murray.

Also here is “Golfing with Bing and Bob,” with the duo on the road to their favorite golf outings from the 1030s-1950s; 1943’s “Don’t Hook Now,” shot at Rancho Santa Fe on the occasion of Crosby’s sixth annual pro-am tournament, with cameos from Sam Snead, Ben Hogan, Jimmy Hines and Byron  Nelson; and “Faith, Hope and Hogan,” an episode of the religious show “The Christophers” in which Bing is joined by Hope (Bob), Harris (Phil)  and Hogan (Ben).

Two shorts—one silent (with added musical score and sound effects) and one with sound–round out the collection. In “Golf” (1922), funnyman Larry Semon, Oliver Hardy and “Three Stooges” regular Vernon Dent get into golf hi-jinks , along with a sly squirrel and some superior train stunts. And in the classic “The Golf Specialist” (1930), W.C. Fields is J. Heffington Bellwether, a hotel guest who tries to teach the flirtatious house detective’s wife how to excel on the links, but numerous distractions get in the way.

With such a diverse scorecard of rare, golf-flavored entertainment, “Golf Mania!” is a surefire hole-in-one for DVD collectors seeking leisurely fun in the sun from the comfort of their own clubhouse… and makes a nice gift for golf lovers.

See for yourself with this preview comprised of a few snippets from Golf Mania!: 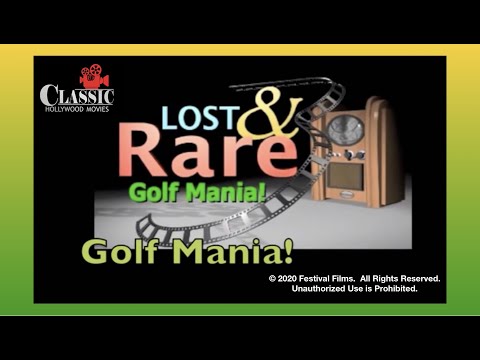