While Hollywood only managed to maximize Jean Arthur’s talents over a period spanning less than a decade, the petite blonde with the inimitable nasal delivery and indomitable demeanor accrued a resumé laden with indisputable comedy classics.

Born in upstate New York on Oct. 17, 1900 to a commercial photographer, Gladys Georgianna Greene knew a nomadic childhood that literally took her from Maine to Florida. Her family was situated in upper Manhattan when she dropped out of high school and turned to modeling, and her layouts led to a movie contract from the Fox Film Corporation. In 1923, she got her first screen role with a small part in John Ford’s western Cameo Kirby, and within five years, she had over four dozen credits, the bulk of which were largely unremarkable.

With the advent of the talkies, her stage name permanently changed to Jean Arthur, and Paramount Pictures started giving her a push in some series vehicles: with William Powell as Philo Vance in The Canary Murder Case and The Greene Murder Case (both 1929), and opposite Warner Oland as Fu Manchu in The Mysterious Dr. Fu Manchu (1929) and The Return of Dr. Fu Manchu (1930).

She did manage to get fifth billing in The Silver Horde (1930) with Joel McCrea and moved up to third billing in Danger Lights (1930), but career traction didn’t materialize, and after her deal was up, Arthur headed to Broadway for the professional seasoning she desired. His natural brunette locks now bleached to the familiar blonde, she received increasingly substantive parts and good notices for her stage work over the next few years, and she returned west in 1933 to sign with Columbia Pictures. The studio quickly busied her in a string of dramas and light farces.

As a reporter, Arthur was assigned to cover a high-profile mob trial in Whirlpool (1934), and followed with a courtroom drama, The Defense Rests, that same year. Also in ’34, Jean played a cleaning lady who becomes confidante to a young student in the tearjerker The Most Precious Thing in Life. In 1935, a small town’s gossip mill nearly ruins Jean’s reputation when a misunderstanding leads everyone to wrongly assume she’s gotten pregnant out of wedlock in Party Wire. But it was up to director John Ford, working on loan, to first give her considerable comic gifts effective rein with 1935’s The Whole Town’s Talking.

She continued her streak in ‘35 when a chance meeting with debonair Herbert Marshall leads the two to masquerade as butler and cook –with disastrous results–in If You Could Only Cook; and Arthur was seen as a manicurist on an ocean liner in the comedic crime caper The Public Menace. She wowed audiences in 1936 as The Ex-Mrs. Bradford opposite William Powell as her once and future husband, and her popularity continued with Adventure in Manhattan when she and journalist Joel McCrea got mixed up in an art gallery heist. Jean”s penchant for delightful romantic romps has her meeting her match with sexist magazine mogul George Brent in More Than a Secretary (1936), and a change-of-pace historical outing found her cast as Calamity Jane co-starring with Gary Cooper’s Wild Bill Hickok in The Plainsman (1936).

Arthur swiftly became a favorite of director Frank Capra, who gave her the most memorable leads of her career in three of his biggest successes. In Mr. Deeds Goes to Town (1936), she’s a reporter whose job was to make a fool out of newly-minted millionaire Gary Cooper, and who instead fell in love with him. In You Can’t Take It  with You, the Oscar-winning Best Picture of 1938, she and co-star James Stewart must find a way for their decidedly different families to get along, and the duo was reunited the following year for Mr. Smith Goes to Washington. This acclaimed look at Capitol Hill wheeling and dealing indelibly established her persona as the tough-veneer, tender-core career woman which followed Jean throughout her career.

Other highlights from Arthur late ’30s/early ’40s heyday included such breezy fare as Easy Living (1937), with Ray Milland and fellow Capra alum Edward Arnold; Too Many Husbands (1940), where she found herself the object of affection of two men (Melvyn Douglas and Fred MacMurray), and George Stevens’ The Talk of the Town (1942) with Cary Grant and Ronald Colman.  She reunited with Joel McCrea in 1943 for The More the Merrier, another George Stevens classic, which led to her sole career Oscar nomination. And the war-themed The Impatient Years (1944) featured her and about-to-ship-out Army inductee Lee Bowman marrying after a whirlwind three-day romance, then struggling to keep their marriage together after he returns home. Her farcical portfolio tends to obscure how effective she could be in drama, as well evidenced by the south-of-the-border aviation tale Only Angels Have Wings (1939), with Grant and her Mr. Smith sidekick Thomas Mitchell.

Despite her success and popularity, the introverted, painfully shy Arthur had little love for studio and industry demands. Her constant chafing kept her relationship with Columbia honcho Harry Cohn contentious, and when he released her from her contract in 1944, she drove off the lot without looking back. Arthur would only resurface onscreen twice more, as a U.S. Congresswoman in Billy Wilder’s post-WWII Berlin-set tale  A Foreign Affair (1948)  and as Brandon De Wilde’s mother in the classic 1953 western Shane.

From the 1950s through the ’70s, Jean intermittently appeared on Broadway; named as the original lead in both Born Yesterday and First Monday in October, health issues related to stage fright forced her to bail out before opening in each case. Arthur had a very short-lived, self-named TV situation comedy in the mid-’60s, and taught theatre arts at Vassar and other colleges before retiring in the early ’70s. She thereafter lived a largely reclusive existence at her Carmel, California home until her passing in 1991.

And now, enjoy Jean Arthur’s brilliance in the 1936 theatrical trailer for Mr. Deeds Goes to Town: 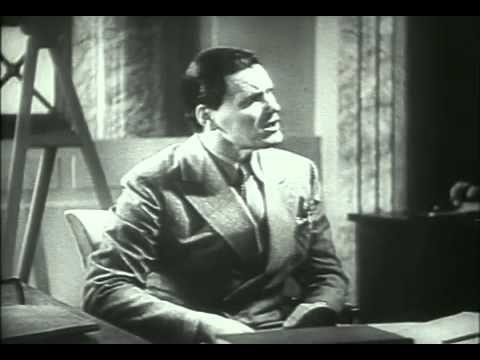