Editor’s Note: This article was originally published in May of 2012.

Here are 10 trivia facts about Bela Lugosi which originally appeared as a “Guess the Actor” feature on our Facebook page. There are hundreds of pieces of behind-the-scenes information about this legendary horror star. Please feel free to comment and add more trivia we might have missed.

1. Before coming to Hollywood, he had already made his Broadway debut.

American film audiences first saw Bela Lugosi as an enemy agent plotting to blow up the Panama Canal in a 1923 Fox suspenser entitled The Silent Command. The Hungarian-born actor arrived in the U.S. in 1920, and–after various manual labor jobs–found acting work in New York’s Hungarian acting community. His Broadway break came in 1922 with the role of an Apache dancer in The Red Poppy. Still unable to speak much English, Bela learned his lines phonetically and made enough of an impression to get other roles–including, in 1927, that of a certain Transylvanian nobleman with an aversion to crosses and mirrors and a taste for the necks of young ladies…but more about that later.

2. In fact, Lugosi starred on the stage and in films in his native country.

Bitten, not by a bat, but by the acting bug at an early age, Lugosi made his stage debut while still a teenager in 1900 or 1901 (the details are a little sketchy) in his native Austria-Hungary. Appearing in everything from operettas to Shakespeare, and at one point playing Jesus, Bela would eventually move to Budapest and become part of the National Theater of Hungary. His time there, usually marked with small supporting roles, was interrupted by Army service in World War I (where Bela was part of the ski patrol!). He made his first film in 1917 with Az Ezredes (under fellow Hungarian and future Casablanca director Michael Curtiz), and appeared in several more movies over the next two years. But when Hungary became independent after WWI and the Communists seized power in 1919, Lugosi–who had been active in organizing an actors’ union–was forced to flee: first to Vienna, then Berlin, before finally landing in New Orleans.

3. His first and last movie roles were silent.

It’s no surprise that Bela Lugosi’s film debut in 1917’s Az Ezredes (The Colonel) was, of course, silent. But the capstone to his 40-year movie career, a three-year-old stock-footage appearance in D-movie legend Ed Wood’s sci-fi shocker Plan 9 from Outer Space (1959), was also dialogue-free. What’s more, Bela’s last role prior to Plan 9 was as a mute butler in the 1956 chiller The Black Sleep. This was certainly an ironic end for one of early Hollywood’s most distinctive voices.

4. His performing name was a tribute to his birthplace.

Born Bela Ferenc Dezsö Blasko on Oct. 20, 1882 in the town of Lugos, Austria-Hungary (now Lugoj, Romania), the actor would create his stage name as a permanent remembrance to his homeland and place of birth. Lugosi also briefly–thank heavens!–used the rather unwieldy pseudonym Arisztid Olt in some of his European stage and film appearances.

5. He did “body double” work for a memorable animated movie.

When the makers of the 1940 Disney animated opus Fantasia needed a live actor for photo references so they could draw the Slavic demon Chernabog in the “Night on Bald Mountain” sequence, they fittingly turned to Bela Lugosi. Years later, studio artist Bill Tytla would say that the Lugosi footage was found to be unsuitable, and that director Wilfred Jackson wound up serving as Chernabog’s model (a claim that, according to horror movie maven Forrest J. Ackerman, was discounted by Walt Disney himself). Looking at the bat-winged monster come to life on the screen, however, it seems clear that Bela definitely had some influence on the final product.

In 1997, the United States Postal Service released a series of five Classic Movie Monsters postage stamps. Along with fellow fright icons Lon Chaney (The Phantom of the Opera), Lon Chaney, Jr. (The Wolf Man), and Boris Karloff (Frankenstein and The Mummy), Lugosi was featured as the undying Dracula.

While his later career was marked mostly by B-movie work in forgettable films (Bela Lugosi Meets a Brooklyn Gorilla, anyone?), Bela did garner critical acclaim for his performance in 1931’s Dracula, along with such pictures as Murders in the Rue Morgue (1932), The Black Cat (1934), The Raven (1935), Son of Frankenstein (1939), and others. Unfortunately, that sort of genre work rarely gets noticed by the Academy Awards voters. Still, Bela’s in good company, as such Golden Age contemporaries as John Barrymore, Errol Flynn, Myrna Loy, and Edward G. Robinson–along with fellow “bogey men” Karloff, Peter Lorre, Vincent Price, and the Chaneys–never got nominations, either.

8. Another performer, however, won an Oscar for portraying him.

For his uniquely comical and touching turn as an aged, drug-addicted Lugosi in Tim Burton’s 1994 biopic Ed Wood, veteran actor Martin Landau was given the Best Supporting Actor Academy Award. Landau’s performance, however, wasn’t universally praised; members of the Lugosi family took exception with the movies’s distortion of facts, the on-screen profanity (something they said Bela rarely did), and the claim that Lugosi’s relationship with Universal’s other horror star, Boris Karloff, was as hostile as depicted.

Bela and Boris, while not the best of friends, were always cordial to each other, they said, on and off the set of the eight pictures they made together. Supposedly, though, Lugosi didn’t like Karloff’s habit of stopping shooting in mid-afternoons for a tea break.

9. He played the character he was best known for in two films.

Ask anyone on the street what Dracula sounds like, and the odds are they’ll launch into a Bela Lugosi imitation. As identified as he is with Bram Stoker’s Transylvanian bloodsucker, however, the actor only played the Count on the big screen twice. Bela re-created his Broadway stage role for Universal in 1931’s Dracula (director Tod Browning’s first choice, Lon Chaney, died from throat cancer the year before), and 17 years later he would don the cape once more for Abbott and Costello Meet Frankenstein. Like co-stars Lon Chaney, Jr. (as the Wolf Man) and Glenn Strange (as the Frankenstein Monster), Lugosi played his part in that horror/comedy romp seriously, making the scares–and laughs–that much more effective.

Lugosi played other vampiric characters–of one sort or another–in MGM’s Mark of the Vampire (1935), also directed by Browning; for Columbia Pictures in The Return of the Vampire (1944), originally planned as a Dracula follow-up before Universal threatened legal action; and in the British comedy Mother Riley Meets the Vampire (1952), about which the less said the better.

10. He was laid to rest in part of the costume of his most famous role.

One piece of Lugosi lore that Tim Burton’s Ed Wood did get right was that, after Bela died in August of 1956, the iconic star was buried in a Dracula cape from one of his stage performances. Lugosi’s son, lawyer Bela G. Lugosi, would later say that he and his mother, the actor’s fourth wife, made the choice…one which Bela most likely would have found fitting. Unlike Burton’s depiction, however, Bela’s funeral (paid for in part by an anonymous Frank Sinatra) was a well-attended event with many notable guests. A famous (though apparently false) story claimed that mourners Vincent Price and Peter Lorre were looking at Lugosi’s body lying in his coffin when Lorre turned to Price and asked, “Should we drive a stake through his heart, just in case?” Neither actor, however, attended the actual service.

Now, sit back, turn out the lights (if you dare!), and see horror master Bela Lugosi rise up from the grave in a 1940s re-release trailer for his fright classic Dracula: 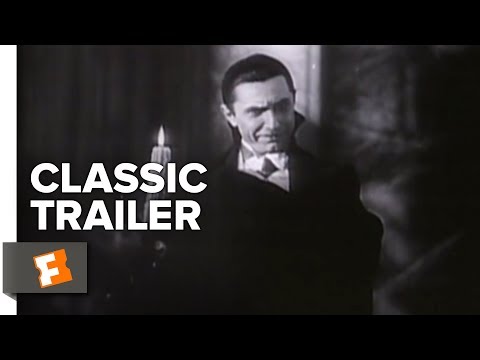