Here are 10 trivia facts about actor Tommy Lee Jones, who recently received his fourth Academy Award nomination for his portrayal of anti-slavery cruasder Thaddeus Stevens in Steven Spielberg’s Lincoln . There are hundreds of pieces of behind-the-scenes information about the popular star. Please feel free to comment and add more trivia we might have missed.

1. Jones shares his birth date with a noted director whom he’s worked with three times.

Hailing from San Saba in central Texas, Jones has the same birthday (Sept. 15, 1946) as filmmaker and fellow Oscar-winner Oliver Stone. The two have collaborated on three movies: the “historical conspiracy” drama JFK (1991); Heaven and Earth, a 1993 drama about a Vietnamese woman who leaves her war-torn country and weds an American soldier; and  the controversial tale of mass murder and mass media, Natural Born Killers (1994).

2. One of Jones’ college roommates would also go on to become a globally-recognized individual.

The son of an oil field worker and a teacher/beauty shop owner, Jones’ high school work was strong enough to earn him a scholarship to Harvard. During his Ivy League tenure in the mid-1960s, he  lived in the same dorm and later roomed with future U.S. Senator/ Vice President Al Gore. The duo have managed to maintain their friendship over the decades. In fact, Tommy gave the nominating speech for presidential candidate Gore at the 2000 National Democratic Convention.

3. Jones was a participant in a legendary college sporting event.

As an offensive tackle on Harvard’s unbeaten 1968 football team, Tommy  played in that year’s now-famous “The Tie” gridiron showdown against Ivy League rival Yale. Years later the actor would appear in Kevin Rafferty’s 2008 documentary Harvard Beats Yale 29-29, recounting what it was like when, in the very last minute of the game, Harvard earned 16 points to tie a seemingly victorious Yale squad. Still an avid sports fan, Jones enjoys playing equestrian polo (and owns “a string of poloponies”)  and devotedly follows the NBA’s San Antonio Spurs.

4. Jones’ start as a professional actor was the subject of a popular syndicated comic strip feature.

Fresh out of Harvard, Jones received his first job on the Broadway stage in 1969’s A Patriot for Me, starring Maximilian Schell. His performance as a priest was unfortunately cut short when the show closed after only 49 presentations, but there’s more to the story. It’s said that he gave actress Jane Alexander a letter of introduction which quickly got him an agent, who worked fast and secured his Great White Way debut. It was pretty much unheard of at the time to appear on Broadway within 10 days of graduating college, and Tommy’s quick show biz indoctrination appeared as one of “Ripley’s Believe It or Not’s” newspaper cartoon panels of bizarre events.

5. His very first screen role was in a hit film whose lead character is supposedly based–in part–on Jones.

Moviegoers were introduced to Tommy in 1970, when (billed as “Tom Lee Jones”) he appeared as “Hank Simpson” in the Oscar-nominated tearjerker Love Story, based on Erich Segal’s best-selling novel. According to multiple accounts, the author has stated that the lead character of Oliver Barrett IV (played on the big screen by Ryan O’Neal) was a composite of several people that Segal knew from his grad student days at Harvard…including Jones and Al Gore.

6. Before hitting it big in movies, Jones had a recurring role in a popular TV soap opera.

After Jones’ Love Story debut, he was able to get intermittent work both on and off Broadway, and frequently appeared on the ABC  soap opera One Life to Live as Dr. Mark Toland from 1971-75 (although he was once quoted as saying it was “a good day” when he finally left the daytime drama). During his soaper days, he acted with and still stays friendly with Tom Berenger.

7. In his career, Jones has portrayed at least six real people.

Along with dozens of fictional roles as escaped convicts, avenging lawyers, Texas Rangers. comic book supervillains, space cowboys, and more, Jones has also won acclaim in some diverse real-life turns. Among his most memorable: reclusive business tycoon Howard Hughes in The Amazing Howard Hughes (1977);  country star Loretta Lynn’s husband Doolittle Lynn in Coal Miner’s Daughter (1980); an Emmy-winning performance as condemned murderer Gary Gilmore in The Executioner’s Song (1982); Louisiana businessman Clay Shaw in Oliver Stone’s JFK; the title role of baseball giant Ty Cobb in Cobb (1994); and as sharp-tongued Pennsylvania congressman Thaddeus Stevens in Lincoln (2012). And Tommy donned an Army uniform and sunglasses to play Gen. Douglas MacArthur in the upcoming post-WWII drama Emperor. FYI: The jury is still out as to if his role as alien hunter “K” in the Men in Black movies is fictional or not.

8. On the other hand, Jones lost out on a pair of iconic sci-fi film roles.

Sometimes an actor is remembered for the roles they didn’t get as well as those they did, and in Tommy’s case this meant being passed over for the leads in two 1980s sci-fi favorites. Jones was among the actors considered for the part of one-eyed ex-con “Snake” Plissken (ultimately played by Kurt Russell) in John Carpenter’s 1981 cult favorite Escape from New York, and he was in the running for android-hunting detective Rick Deckard before losing out to Harrison Ford in 1982’s Blade Runner. Jones and Ford would, of course, team up to play a lawman and his quarry a decade later in The Fugitive.

9. Jones came up with several of his most popular lines of movie dialogue himself.

From his intense monologue to Faye Dunaway in the 1978 thriller Eyes of Laura Mars to his manic ramblings in the 1992 Steven Seagal actioner Under Siege, Tommy has delivered some unforgettable movie lines. What audiences may not know is that the actor came up with some of this material on his own. His most famous ad lib came in 1993’s The Fugitive, when Jones’ Sam Gerard has escaped prisoner Richard Kimble (Harrison Ford) cornered in a sewer. As Kimble cries out “I didn’t kill my wife!,” a world-weary Gerard replies “I don’t care!”

10. Jones can claim four Academy Award nominations, with one win, to date.

In addition to his Lincoln nomination, Tommy Lee has been an Oscar contender three other times: in 1992, for Best Supporting Actor in JFK; for Best Supporting Actor the following year in The Fugitive, which he won; and in 2008 for Best Actor, for his performance in In the Valley of Elah. Along with these and other acting accolades, Tommy received a coveted star on the Hollywood Walk of Fame in 1994. His star can be found at 6925 Hollywood Blvd., just a stone’s throw from the famed Grauman’s Chinese Theatre.

Now, let’s see that delightful deadpan delivery which defines Tommy Lee Jones in the theatrical trailer for 1993’s The Fugitive: 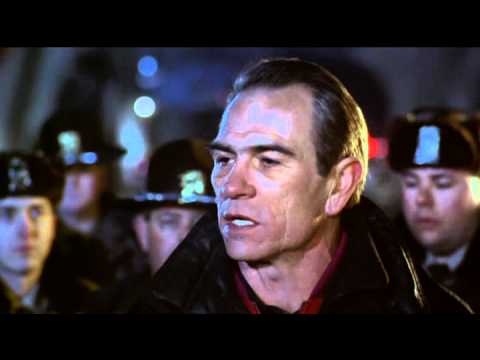