Here are 10 trivia facts about Guess Who’s Coming to Dinner from 1967, which originally appeared as our Mystery Movie Quiz on our Facebook page. There are hundreds of pieces of behind-the-scenes information about this movie. Please feel free to comment and add more trivia we might have missed.

1. The movie takes place all in one day.

Although the events in Guess Who’s Coming to Dinner occur over the course of a single day, it’s a very busy one for the Drayton family of San Francisco. Liberal-minded parents Matt and Christina Drayton (Spencer Tracy and Katharine Hepburn) discover that their daughter Joey (Katharine Houghton) has gotten engaged to an older man, one she just met while on vacation in Hawaii. Adding to the surprise, the fiancé in question, doctor John Prentice (Sidney Poitier), is black, which at the time would have kept the couple from tying the knot in 14 states. Yes, hard as it to believe, in early 1967, some states still had anti-miscegenation marriage laws on their books (explained further below in this article).

Matt’s best friend, Monsignor Ryan (Cecil Kellaway), is visiting when– in the words of Tillie, the Draytons’ housemaid (Isabel Sanford), “All hell done broke loose now!”–and just about accuses Tracy of being a phony about his liberal beliefs and hints that he is indeed prejudiced. At the art gallery she owns, Christina gets into a tussle with a longtime employee over the racial issue, and even Tillie is against the impending marriage at first (“Civil rights is one thing,” she says. “This here is somethin’ else”). In the meantime, since the newlyweds-to-be are just passing through town, it’s necessary for John’s parents (Roy Glenn and Beah Richards) to fly in from Los Angeles so everyone can be together to talk it all out at dinner. Hence the title, get it?

2. Two of the actors were related in real life.

3. The director worked with two of the lead actors in other films.

Stanley Kramer, in the capacity of director or producer–or, in some cases, both, had collaborated with both Sidney Poitier and Spencer Tracy previous to Guess Who’s Coming to Dinner.

As director, Kramer worked with Tracy in 1960’s Inherit the Wind, along with Fredric March and Gene Kelly, which garnered four Oscar nominations. The pair returned the following year with Judgment at Nuremberg, nominated for eleven Academy Awards, winning two; and in 1963 Tracy got top billing in the filmmaker’s all-star comedy It’s a Mad Mad Mad Mad World, which earned six Oscar noms and took home one.

Kramer and Poitier worked together on two other racially-themed films. 1958’s fugitive drama The Defiant Ones, which co-starred Tony Curtis, was recognized by the Academy with eight Oscar nominations, including both Poitier and Curtis, and Pressure Point (1962) found Poitier playing a prison psychiatrist trying to treat Nazi-sympathizing bigot Bobby Darin.

4. This film deals with a controversial issue.

The premise of the story, although controversial in 1967, was historically out of date shortly before the film played theaters, When the story was conceived and written (and actually even during filming) interracial marriages were still illegal in 14 states. In June 1967, the U.S. Supreme Court handed down their Loving v. Virginia decision, which unanimously ruled that laws prohibiting such unions were unconstitutional. Guess Who’s Coming to Dinner did not open in theaters until December of that year, but had finished production just days before the high court’s ruling. Director Stanley Kramer felt the line of dialogue regarding this issue spoken by veteran actor Roy Glenn should stay in the film because it would still be a powerful scene. Playing Sidney Poitier’s mailman father, Glenn says, “In 16 or 17 states you’ll be breaking the law. You’ll be criminals.”

Spencer Tracy’s eight-minute speech regarding his feelings about his daughter’s interracial marriage was his last turn before the camera (and one of his longest scenes ever in one take), as he died less than two weeks after completing his Oscar-nominated role. Due to the well-known relationship between Kate and Spence, this scene is extremely poignant as the film shows Kate’s face as Spence is speaking, and anyone can see those tear-filled eyes are the genuine article.

5. It is the film debut for a popular Emmy Award winner.

This was the first movie appearance for popular TV actress Isabel Sanford. Although Isabel appeared in more than 50 films and series, including Lady Sings the Blues and Love at First Bite, she is probably best known for portraying George Jefferson’s (Sherman Hemsley) wise-cracking wife Louise, from 1975-85 on The Jeffersons, a role which brought her seven Emmy nominations for Outstanding Lead Actress in a Comedy Series and a win in 1981. She first played Louise on the hit 1970s sitcom All in the Family, which itself broke new ground with its depictions of racial issues.

6. A reference to a historical event was removed from the film.

Isabel Sanford, playing the Draytons’ housekeeper Tillie, is asked many times during the film to add another place to the dinner table. One of those times when she’s told someone else is coming to dinner, the put-upon domestic mockingly guesses, “the Reverend Martin Luther King?” The movie was still playing theatrically in April of 1968 when King was assassinated in Memphis, leading Columbia Pictures and director Stanley Kramer to request that theater owners remove that scene from their prints (they even provided hands-on help on how to do the snipping).

7. One of the stars refused to watch the completed film.

Katharine Hepburn claimed that she couldn’t watch the completed Guess Who’s Coming to Dinner because of her having lost her soul mate and longtime friend, Spencer Tracy, just days after the film’s completion. It was just too painful for her, reminding her of how she was Tracy’s caregiver to the end.

Kate joined Spence in foregoing their salaries in order to appease the insurance company, which didn’t want to take a chance in starring Tracy in the film. Although his health was frail, Tracy felt he could do it. Stanley Kramer, who wanted both of them desperately for this project, also gave up his salary in a show of solidarity. It was almost imperative for the director to get Hepburn and Tracy on board, because he felt their real-life personalities would carry through to what viewers saw on the screen and convey the sense of gravitas that the movie’s theme of racial harmony merited.

8. A priest plays a role in the film.

Screen stalwart Cecil Kellaway, who in his four-decade career worked with everyone from Laurence Olivier (Wuthering Heights) to Elvis Presley (Spinout), is Matt Drayton’s good friend Monsignor Ryan in Guess Who’s Coming to Dinner. Although Kellaway is playing a priest (he was also cast as clerics in The Cardinal and The Confession), it is mentioned in the film that neither Spencer Tracy’s or Katharine Hepburn’s characters are Catholic.

9. Two of the main stars were a couple off-screen.

Volumes have been written about the more-than-40-year forbidden romance of the film’s stars, Katharine Hepburn and Spencer Tracy– he was married and couldn’t get a divorce.

They appeared together in nine films, including some of the best-written and most memorable in Hollywood history. Their first pairing in 1942’s Woman of the Year was followed by Keeper of the Flame (1942), Without Love (1945), The Sea of Grass (1947), State of the Union (1948), Adam’s Rib (1949), Pat and Mike (1952) and Desk Set (1957), along with Guess Who’s Coming to Dinner. This final screen teaming would give Hepburn the second of her record-setting four Best Actress Academy Awards — she was nominated 12 times. Tracy was nominated a total of nine times, winning two years in a row for Captains Courageous (1937) and as Father Flanagan in Boys Town (1938).

10. The movie was nominated for ten Oscars, winning in one of the major categories.

Guess Who’s Coming to Dinner is legendary on many fronts, but, oddly enough, not in how many Oscars it took away. It was nominated for ten Academy Awards, including Best Music (Frank De Vol); Best Supporting Actress (Beah Richards); Best Supporting Actor (Cecil Kellaway); Best Actor (Spencer Tracy); Best Director (Stanley Kramer), and the most coveted, Best Picture. It only won, however, in two categories; Best Original Screenplay (William Rose); and Best Actress (Katharine Hepburn). Kate couldn’t be at the ceremonies in person, but longtime friend and collaborator George Cukor accepted the honor in her absence.

Now, enjoy a few scenes from the 1968 theatrical trailer for Guess Who’s Coming to Dinner: 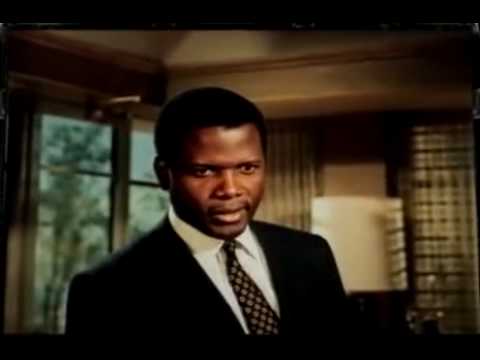