Editor’s Note: This week marks the 30th anniversary of the opening of Robert Zemeckis’s time-hopping comedy Back to the Future. To celebrate, we offer this classic article which was originally published back in time…March of 2011, to be precise.

Here are 10 trivia facts about Back to the Future from 1985, which originally appeared on our Facebook page. There are lots of pieces of behind-the-scenes information about this movie.  Please feel free to comment and add more trivia we might have missed.

1. This movie is an Oscar winner – but not for a major award.

Oscar’s major categories eluded Back to the Future. However, it was nominated for four Academy Awards: Robert Zemeckis and Bob Gale for Best Writing, Screenplay Written Directly for the Screen; Best Original Song, “The Power of Love,” lyrics by Huey Lewis, who has a cameo in the film as one of the band contest judges; Best Sound; and it won  for Best Sound Effects Editing.

2. Foreign terrorists are part of the plot.

Dr. Emmett Brown’s (Christopher Lloyd) DeLorean-turned-time machine requires plutonium to do its thing, so “Doc” hoodwinks some Libyan terrorists into giving it to him. As the inventor explains it all to teenage Marty McFly (Michael J. Fox) in the Hill Valley mall parking lot, they are pursued by the Libyans, who want their plutonium back. Marty escapes in the DeLorean and, once the vehicle reaches 88 miles per hour (the pre-programmed speed to activate the time-warping Flux Capacitor), he is transported back to November, 1955. And then… well, you know the rest. Incidentally, as hard as it is to picture anyone other than Lloyd as “Doc” Brown, among other actors considered for the part were Dudley Moore, Jeff Goldblum and John Lithgow.

3. A major Hollywood studio backed away from making this movie.

The story goes that the Walt Disney Company was thought by Robert Zemeckis to be a perfect fit to make Back to the Future, but that studio chose to back off when they heard that part of the storyline concerns a “time-travelling” plot twist where a mother would be romantically attracted to her own son, thinking it too improper for the Disney name.

Oddly enough, although Disney found it be “too suggestive,” it wasn’t considered risqué enough for other studios when Zemeckis was shopping it around. Many comedies appealing to teenagers at that time were actually much more suggestive of sexual impropriety, like 1982’s Fast Times at Ridgemont High and another popular franchise, Revenge of the Nerds in 1984.

4. Most of the principal shooting was done at night.

From the beginning, Robert Zemeckis wanted Michael J. Fox to play Marty, but a snag arose from his Family Ties TV schedule. Due to co-star Meredith Baxter’s preganancy, more story content was put on Michael, and the show’s producers just couldn’t do without him at that time. Zemeckis and co-writer Bob Gale pretty much had to go ahead and move production along so they offered the part to a few other actors. Deciding that Eric Stoltz would be a good fit following his starring role in Mask, they gave him the part. But all was not peaceful in paradise and after shooting four weeks into the script, it was mutually agreed that Stoltz was not exactly as good a choice as originally thought.

By the time this happened, Baxter already had her baby and was back on the set full-time. Gary David Goldberg, the show’s producer, agreed to let Fox step back in only if it was understood that he fulfill his Family Ties contract, according to scheduled daytime taping times, and shoot Back to the Future afterwards. It was worked out with everyone concerned that the film’s principal photography be done between 6:00 PM and 6:00 AM, and weekends were used for any scenes requiring actual daylight. The only real extra cost involved was that all of Stoltz’s scenes needed to be re-shot (at a cost of $3 million).

5. Three of the actors are well-known for their roles in TV shows.

6. One of the film’s writers also directed the movie.

Primarily known for his special effects wizardry, Robert Zemeckis has had many top directorial experiences. Before winning his Best Director Academy Award for Forrest Gump in 1994, Zemeckis was Oscar-nominated for Back to the Future. His two previous films were crowd-pleasers: Used Cars (1980) with Kurt Russell and Romancing the Stone, starring Michael Douglas and Kathleen Turner, in 1984.

7. The female lead was once a spokesperson for a national food chain.

Remember all those Burger King commercials from 1982 with Lea Thompson? She was a perfect fit because of her wholesome “girl-next-door” qualities and made 22 of them. She also appeared in commercials for Twix candy bars in 1984.

8. This movie was referenced in a State of the Union address.

When “Doc” Brown (in his 1955 persona) makes fun of the idea that an actor–specifically, Ronald Reagan–could become president in the future, he retorts, “I suppose Jack Benny is the Secretary of the Treasury!” A perfect remark, since Benny’s running gag in radio, movies and on TV was that he was tight with money.

It’s been reported that President Reagan was delighted in that sequence of the film. So much so, in fact, that he worked in a nice little reference to it in his 1986 State of the Union address, quipping, “As they said in the film Back to the Future, ‘Where we’re going, we don’t need roads.'”

9. This was the top-grossing movie in the year it was released.

Back to the Future was Universal’s, and Hollywood’s, highest-grossing movie for 1985, taking in more than $380 million worldwide. The movie cost $19 million to produce.

Back To The Future License Plate

10. An automobile is central to the movie’s premise.

John DeLorean’s design was a big hit with the producers of Back to the Future when it played a starring role in the movie in 1985 but not so with the public. By the time the first film of Robert Zemeckis’ trilogy was completed, the company was already in bankruptcy (since 1982) and cars were no longer being made. It was this movie that actually propelled the DeLorean to International fame when it was used in all three films as the basis for “Doc” Brown’s time machine.

The 1981 DeLorean DMC-12 was chosen for its unique stainless steel design and especially for its gull-wing styled doors, both of which would have probably caused folks in 1955 to believe it to be some sort of spacecraft. For the movie, Zemeckis got a California vanity license plate saying “OUTATIME” but trivia fans probably know the plate was registered as “3CZV657.”

And now, let us take you back to the year 1985 with the original theatrical trailer for Back to the Future: 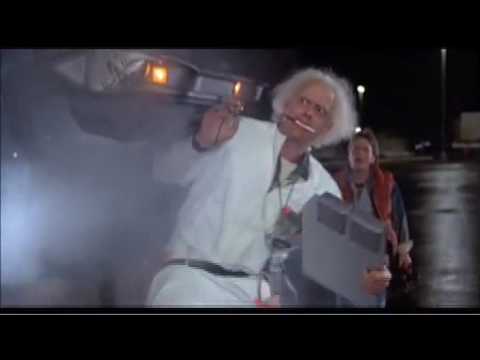