The versatility and sheer verve that marked the man informed his craftwork as well, and allowed this Irish-Mexican performer to forge a remarkable 60-plus-year run onscreen as lead and character player. Born in Chihuahua, Mexico in 1915, Antonio Rudolfo Oaxaca Quinn was still an infant when his father took the family into the states in search of whatever work opportunities could be had, eventually settling in Los Angeles, where he took a job as a cameraman’s assistant. Quinn was 10 when his father was killed in a car accident, and he ultimately had to leave high school to help support the family. He tried his hand at prizefighting, and his knack for draftsmanship got him apprenticed to Frank Lloyd Wright for a time. Ultimately, the drama classes he took overcome a speech impediment set his course (It helped that, when he told Wright a film studio offered him $800 a week, the famed architect replied, “Take it, you’ll never make that much with me.”). So it was that, in 1936, he received his first billed appearance as Anthony Quinn in a minor Universal crime drama, Parole!

His persistence won over a skeptical Cecil B. DeMille, who cast him as a Cheyenne warrior in The Plainsman (1936) with big stars Gary Cooper and Jean Arthur, as well as the director’s daughter Katherine, who became his wife within the year (his first of three marriages). Quinn would work steadily over the balance of the ’30s, largely in B-films, but he started getting noticed in small parts, including musical features like Swing High, Swing Low (1937) with Carole Lombard and Fred MacMurray, followed the same year by Waikiki Wedding, starring one of Hollywood’s biggest draws, Bing Crosby (their  paths would cross again). By the time of the Paramount programmer Bulldog Drummond in Africa (1938), his name was moving up in the credits.

Quinn got higher billing in showy support for DeMille in Union Pacific (1939), as a henchman for bad guy Brian Donlevy going up against hero Joel McCrea. Throughout the early 1940s, he proved a reliable supporting presence for the major studios, invariably as ethnics, heavies or ethnic heavies. His resumé from this time includes Road to Singapore (1940), meeting up with Bing again and fellow co-stars Bob Hope and Dorothy Lamour; then with Hope and Paulette Goddard in a dual role in the horror/comedy The Ghost Breakers; and with James Cagney and Ann Sheridan in City for Conquest that same year.

He appeared for the first time in Technicolor at 20th Century-Fox in their 1941 bullfighting blockbuster, Blood and Sand, followed by his acclaimed portrayal of Crazy Horse in Warner Brothers’ western epic, They Died with Their Boots On,starring  Errol Flynn. While at that studio, he appeared with star Edward G. Robinson and an able cast of contract players from the Warner lot–including Broderick Crawford and Jane Wyman–in the comical crime spree Larceny, Inc. (1942). His star continued to rise as a North African warlord in another Hope/Crosby/Lamour laughfest that same year, Road to Morocco, and he continued to make his mark in another color classic appearing again with Tyrone Power in the swashbuckling The Black Swan.  1943 saw Anthony move up to fourth billing in The Ox-Bow Incident, in support of stars Henry Fonda and Dana Andrews.

Quinn’s roles were getting much more important when he was cast in a pair of gritty World War II dramas, as a Hispanic U.S. Marine in Guadalcanal Diary (1943)  and opposite John Wayne in  Back to Bataan (1945), in which he played the guerrilla leader grandson of famed Filipino freedom fighter Andrés Bonifacio. Between these two timeless WWII films, he managed to sandwich in another of his classic Native American roles as Chief Yellow Hand in the 1944 biopic Buffalo Bill with Joel McCrea in the title role. Many years later when he finally got his name above the title, he remembered, “They said all I was good for was playing Indians!”

In 1947, he was reunited with Wayne at RKO for the color adventure tale Tycoon— and fourth billing might have continued to be his fate, until he took a sabbatical from filmmaking as Elia Kazan’s choice for Stanley Kowalski in the touring company of A Streetcar Named Desire. His acclaimed effort lead to a stint in the show’s Broadway run, and heftier assignments upon his return to Hollywood; his labors for Kazan in Viva Zapata! as the revolutionary’s brother netted him his first Best Supporting Actor Oscar in 1952. Working with Brando and seeing his determination, he commented, “I admire Marlon’s talent, but I don’t envy the pain that created it.” Also, in 1952, he was co-starred with Gregory Peck and Ann Blyth in the seafaring adventure yarn, The World in His Arms at Universal. At MGM in 1953, he was a ruthless outlaw at odds with his brother, Robert Taylor, in Ride, Vaquero!, also starring Ava Gardner and Howard Keel.

He then sojourned to Italy to portray Zampanò, the brutish strongman of Federcio Fellini’s 1954 circus drama La Strada, and had his global reputation cemented as a result. The mid-’50s to mid-’60s would be the most fertile period of Quinn’s career, with highlights including a pair of  performances opposite Kirk Douglas: as Antinoos in the 1955 action-adventure Ulysses (Douglas had the title role), and his second Oscar-winning supporting effort, as painter Paul Gauguin in Vincente Minnelli’s Vincent Van Gogh biography Lust for Life (1956), with Douglas as Van Gogh. He starred as Quasimodo in the 1957 remake of The Hunchback of Notre Dame opposite Gina Lollobrigida, and was a rancher competing with son Anthony Franciosa for the attentions of Anna Magnani in Wild Is the Wind (his first Best Actor nomination from the Academy).

This began a “westerns” period for Quinn, with him starring in four oaters within two years: The Ride Back (1957) paired him with William Conrad as a Mexican fugitive; as a ranch owner in the contemporary Southwestern crime drama The River’s Edge (1957) with bad guy Ray Milland; Last Train from Gun Hill (1959), which pit him against old friend and co-star Kirk Douglas; and in Warlock (1959) he was a slick dandy slightly out of character with co-stars Henry Fonda and Richard Widmark.

The early ’60s brought more successes suited to Quinn’s talents as he appeared in one hit after another. The 1960 suspenser Portrait in Black found doctor Quinn in love with a married Lana Turner, while later that year he played an Eskimo hunter in The Savage Innocents…and yes, that film is what inspired a young Bob Dylan to write the song “Quinn the Eskimo (Mighty Quinn).” Anthony joined an all-star International cast that included David Niven, Grogory Peck and Richard Harris for the WWII action classic The Guns of Navarone (1961); he was top-billed in Barabbas (1962), a Biblical-based epic about the thief and murderer whose life was spared by Pilate instead of Jesus’; in the big screen version of Requiem for a Heavyweight (1962), he excelled as faded boxer “Mountain” Rivera along with Mickey Rooney and Jackie Gleason; in David Lean’s 1962 Oscar-winner Lawrence of Arabia, he was a rebellious Arab prince; the adventure Behold a Pale Horse (1964) reunited him with friend and frequent co-star Peck; and that same year his last Oscar-nominated role became one of his most famous, as the  life-embracing Mediterranean peasant who takes writer Alan Bates under his wing in Zorba the Greek.

In A High Wind in Jamaica (1965), Quinn was a high-spirited pirate, where captive children show him the error of his buccaneering life. In The Lost Command (1966), Quinn was a glory-seeking soldier fighting France’s doomed cause in colonial Indochina and Algeria, rubbing shoulders with a fine International cast. He’d remain a demanded presence in The Shoes of the Fisherman (1968) as a Ukrainian priest elected Pope, but conflicted in his beliefs; and in Stanley Kramer’s charming WWII comedy, The Secret of Santa Vittoria (1969), he became an unlikely leader. The following year found him in another Kramer project, R.P.M., in which he starred as a liberal college professor given the difficult task of staving off campus anarchy.

His work continued into the ’70s as evidenced by another Native American portrayal in  the quirky comedy Flap (1970), directed by Carol Reed, and the same year he helped Ingrid Bergman  rediscover the joys of life in the romantic drama, A Walk in the Spring Rain. Of his appearances with Bergman, Quinn said, “I reckon there wasn’t a man who came within a mile of her who didn’t fall in love with her.”

He was a gritty cop in Across 110th Street (1972); in 1973’s The Don Is Dead, as a mob chief who planned to be the “boss of all the bosses.” In ’75, he showed his tender side as a widower trying to keep his family together in The Children of Sanchez, which also boasts a great score by Chuck Mangione.

Over the latter phase of his career, Quinn became less discriminating over his choice of projects, and his directors less likely to reign in his excesses, but he’d work as often as health would allow. Notable in his ’70s output were his acclaimed but short-lived ABC series “The Man and the City” and the 1976 mini-series Jesus of Nazareth, and in that same year,  his big-screen efforts as Mohammed’s uncle in Mohammad: Messenger of God, a sweeping religious drama which caused controversy on a global scale at the time of its release. The Greek Tycoon (1978) paired him with Jacqueline Bisset — he was a Greek shipping magnate and she, the widow of an assassinated U.S.president… hmmm, sound familiar?

The ’80s were marked by a Broadway run in the stage adaptation of “Zorba,” while Quinn’s films included Lion of the Desert and High Risk. The ’90s lead to plentiful supporting opportunities from Hollywood like Revenge, with Kevin Costner in a tale of greed, passion and vengeance. He appeared in Mobsters and in Spike Lee’s Jungle Fever in 1991; he was Maureen O’Hara’s delightful next-door-neighbor in Only the Lonely, a 1992 John Candy comedy; he played opposite Arnold Schwarzenegger in Last Action Hero in ’93; was perfectly cast in the patriarch of a vineyard-owning family in 1995’s A Walk in the Clouds with Keanu Reeves, and put in an appearance in the 1996 HBO biodrama Gotti, about the life and crimes of New York’s “Teflon Don.” Also in the mid-’90s came a series of small-screen stints as Zeus in the Kevin Sorbo Hercules telefilms. Quinn’s screen farewell came in Avenging Angelo, released after his 2001 death at age 86.

Anthony Quinn, a creative genius who studied painting and sculpture as well as acting and who never pulled any punches, summed it all up when he said, “I have lived in a flurry of images, but I will go out in a freeze frame.”

And now, enjoy Quinn’s performance in scenes from the theatrical trailer for Last Train from Gun Hill: 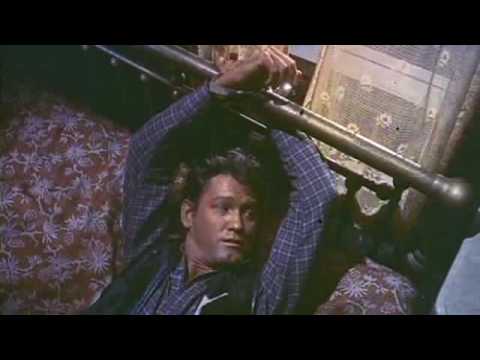