Whomever said overt violence on film is a sad reflection on the effects of modern technology and overexposure to violence in video games has never seen Edwin S. Porter’s The Great Train Robbery released in 1903. Plenty of violence and plenty of bodies for a film that runs less than 12 minutes.

Filmed in the wilds of Fort Lee, New Jersey for Hollywood had not been invented yet, The Great Train Robbery is noted for being the first linear/storyline film. The film begins at plot point A and moves through plot point Z to the wow finish in a very compact fourteen scenes. In 1903 this was pretty revolutionary. With a running time of just under 11-12 minutes (depending on projection speed) it was a blockbuster.

Having previously viewed this film in several film courses and in clips in any number of documentaries on film over the years, I confess, I tended to write it off as a primitive curiosity. It was with a more serious intent I sat down to view it again and have to say, I thoroughly enjoyed it. As a modern viewer with more than a few silent films under her belt, I’d say in spite of all the western cliches that spawned from this little film in the last 106 years, it’s still a pretty good picture. A corker, in fact.

Surprisingly, this little film has given me a new appreciation for the Western genre. It’s a genre I’ve often ignored for no good reason. I’m going to look forward to viewing some more early efforts by mostly forgotten cowboys like Art Acord, Fred Thomson, Tom Mix and W.S. Hart. Admittedly, the last two are not really forgotten, but it’s new territory for me.

Tim Dirks has a thorough review and break down of the film here.

This film also is noteworthy for starting the career of another legendary cinematic cowboy and pioneering producer of the early silent era, G.M. “Broncho Billy” Anderson. David Kiehn has authored a fabulous book on Essanay, Broncho Billy and the Essanay Film Company, I highly recommend it. You can also see David and some great early films if you are in the SF Bay Area by visiting the Niles Essanay Silent Film Museum 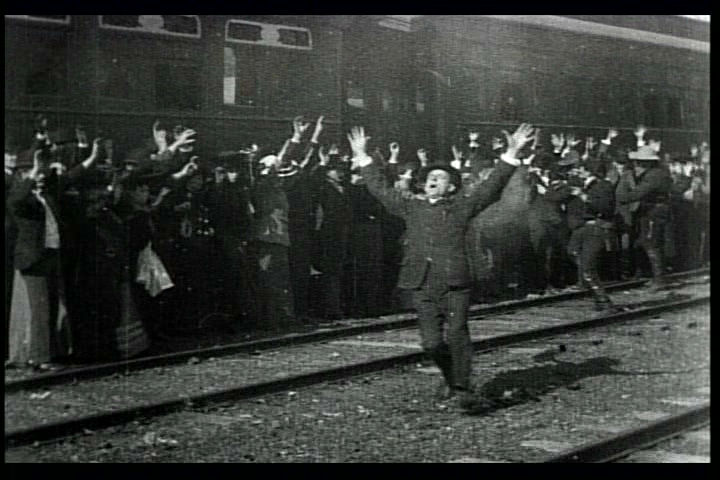 G.M. Anderson as an innocent passenger, gunned down by the train robbers

A lifelong film afficionado with a particular affection for films of the silent era. Donna Hill has collected memorabilia with regard to Rudolph Valentino for over thirty years. The collection of rare photos is shared by the author’s book, Rudolph Valentino The Silent Idol, his Life in Photographs. The author lives in San Francisco.For more information, visit Strictly Vintage Hollywood and Falcon Lair: The Rudolph Valentino Homepage.